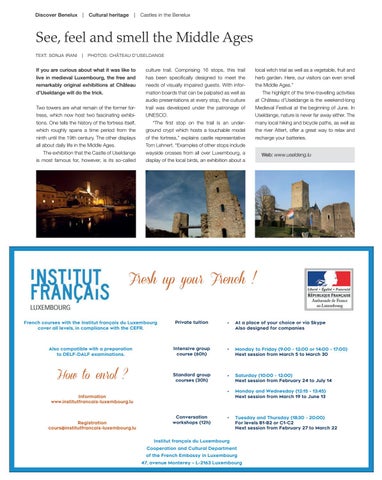 If you are curious about what it was like to live in medieval Luxembourg, the free and remarkably original exhibitions at Château d’Useldange will do the trick. Two towers are what remain of the former fortress, which now host two fascinating exhibitions. One tells the history of the fortress itself, which roughly spans a time period from the ninth until the 19th century. The other displays all about daily life in the Middle Ages. The exhibition that the Castle of Useldange is most famous for, however, is its so-called

culture trail. Comprising 16 stops, this trail has been specifically designed to meet the needs of visually impaired guests. With information boards that can be palpated as well as audio presentations at every stop, the culture trail was developed under the patronage of UNESCO. “The first stop on the trail is an underground crypt which hosts a touchable model of the fortress,” explains castle representative Tom Lehnert. “Examples of other stops include wayside crosses from all over Luxembourg, a display of the local birds, an exhibition about a

local witch trial as well as a vegetable, fruit and herb garden. Here, our visitors can even smell the Middle Ages.” The highlight of the time-travelling activities at Château d’Useldange is the weekend-long Medieval Festival at the beginning of June. In Useldange, nature is never far away either. The many local hiking and bicycle paths, as well as the river Attert, offer a great way to relax and recharge your batteries. Web: www.useldeng.lu

Fresh up your French ! French courses with the Institut français du Luxembourg cover all levels, in compliance with the CEFR.

Also compatible with a preparation to DELF-DALF examinations.

How to enrol ? Information www.institutfrancais-luxembourg.lu

of the French Embassy in Luxembourg 47, avenue Monterey – L-2163 Luxembourg