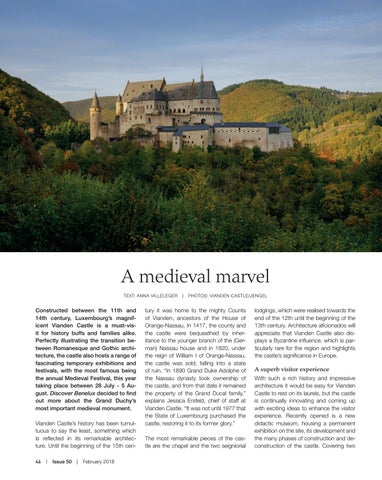 Constructed between the 11th and 14th century, Luxembourg’s magnificent Vianden Castle is a must-visit for history buffs and families alike. Perfectly illustrating the transition between Romanesque and Gothic architecture, the castle also hosts a range of fascinating temporary exhibitions and festivals, with the most famous being the annual Medieval Festival, this year taking place between 28 July - 5 August. Discover Benelux decided to find out more about the Grand Duchy’s most important medieval monument. Vianden Castle’s history has been tumultuous to say the least, something which is reflected in its remarkable architecture. Until the beginning of the 15th cen46  |  Issue 50  |  February 2018

tury it was home to the mighty Counts of Vianden, ancestors of the House of Orange-Nassau, In 1417, the county and the castle were bequeathed by inheritance to the younger branch of the (German) Nassau house and in 1820, under the reign of William I of Orange-Nassau, the castle was sold, falling into a state of ruin. “In 1890 Grand Duke Adolphe of the Nassau dynasty took ownership of the castle, and from that date it remained the property of the Grand Ducal family,” explains Jessica Ersfeld, chief of staff at Vianden Castle. “It was not until 1977 that the State of Luxembourg purchased the castle, restoring it to its former glory.” The most remarkable pieces of the castle are the chapel and the two seigniorial

lodgings, which were realised towards the end of the 12th until the beginning of the 13th century. Architecture aficionados will appreciate that Vianden Castle also displays a Byzantine influence, which is particularly rare for the region and highlights the castle’s significance in Europe.

With such a rich history and impressive architecture it would be easy for Vianden Castle to rest on its laurels, but the castle is continually innovating and coming up with exciting ideas to enhance the visitor experience. Recently opened is a new didactic museum, housing a permanent exhibition on the site, its development and the many phases of construction and deconstruction of the castle. Covering two