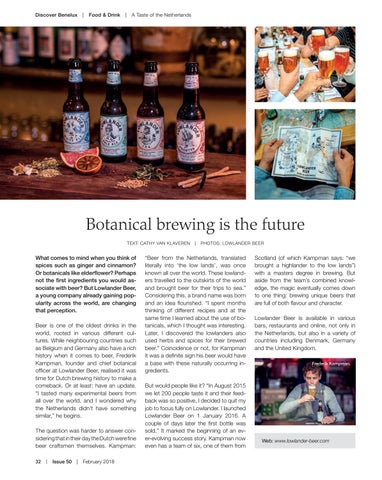 Discover Benelux  |  Food &amp; Drink  |  A Taste of the Netherlands

What comes to mind when you think of spices such as ginger and cinnamon? Or botanicals like elderflower? Perhaps not the first ingredients you would associate with beer? But Lowlander Beer, a young company already gaining popularity across the world, are changing that perception. Beer is one of the oldest drinks in the world, rooted in various different cultures. While neighbouring countries such as Belgium and Germany also have a rich history when it comes to beer, Frederik Kampman, founder and chief botanical officer at Lowlander Beer, realised it was time for Dutch brewing history to make a comeback. Or at least: have an update. “I tasted many experimental beers from all over the world, and I wondered why the Netherlands didn’t have something similar,” he begins. The question was harder to answer considering that in their day the Dutch were fine beer craftsmen themselves. Kampman: 32  |  Issue 50  |  February 2018

“Beer from the Netherlands, translated literally into ‘the low lands’, was once known all over the world. These lowlanders travelled to the outskirts of the world and brought beer for their trips to sea.” Considering this, a brand name was born and an idea flourished. “I spent months thinking of different recipes and at the same time I learned about the use of botanicals, which I thought was interesting. Later, I discovered the lowlanders also used herbs and spices for their brewed beer.” Coincidence or not, for Kampman it was a definite sign his beer would have a base with these naturally occurring ingredients. But would people like it? “In August 2015 we let 200 people taste it and their feedback was so positive, I decided to quit my job to focus fully on Lowlander. I launched Lowlander Beer on 1 January 2016. A couple of days later the first bottle was sold.” It marked the beginning of an ever-evolving success story. Kampman now even has a team of six, one of them from

Scotland (of which Kampman says: “we brought a highlander to the low lands”) with a masters degree in brewing. But aside from the team’s combined knowledge, the magic eventually comes down to one thing: brewing unique beers that are full of both flavour and character. Lowlander Beer is available in various bars, restaurants and online, not only in the Netherlands, but also in a variety of countries including Denmark, Germany and the United Kingdom. Frederik Kampman.