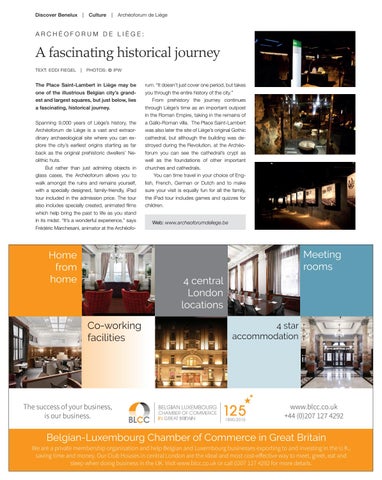 The Place Saint-Lambert in Liège may be one of the illustrious Belgian city’s grandest and largest squares, but just below, lies a fascinating, historical journey. Spanning 9,000 years of Liège’s history, the Archéoforum de Liège is a vast and extraordinary archaeological site where you can explore the city’s earliest origins starting as far back as the original prehistoric dwellers’ Neolithic huts. But rather than just admiring objects in glass cases, the Archéoforum allows you to walk amongst the ruins and remains yourself, with a specially designed, family-friendly, iPad tour included in the admission price. The tour also includes specially created, animated films which help bring the past to life as you stand in its midst. “It’s a wonderful experience,” says Frédéric Marchesani, animator at the Archéofo-

rum. “It doesn’t just cover one period, but takes you through the entire history of the city.” From prehistory the journey continues through Liège’s time as an important outpost in the Roman Empire, taking in the remains of a Gallo-Roman villa. The Place Saint-Lambert was also later the site of Liège’s original Gothic cathedral, but although the building was destroyed during the Revolution, at the Archéoforum you can see the cathedral’s crypt as well as the foundations of other important churches and cathedrals. You can time travel in your choice of English, French, German or Dutch and to make sure your visit is equally fun for all the family, the iPad tour includes games and quizzes for children. Web: www.archeoforumdeliege.be