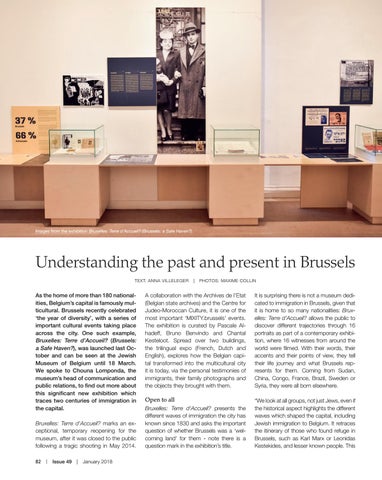 Understanding the past and present in Brussels TEXT: ANNA VILLELEGER  |  PHOTOS: MAXIME COLLIN

As the home of more than 180 nationalities, Belgium’s capital is famously multicultural. Brussels recently celebrated ‘the year of diversity’, with a series of important cultural events taking place across the city. One such example, Bruxelles: Terre d’Accueil? (Brussels: a Safe Haven?), was launched last October and can be seen at the Jewish Museum of Belgium until 18 March. We spoke to Chouna Lomponda, the museum’s head of communication and public relations, to find out more about this significant new exhibition which traces two centuries of immigration in the capital. Bruxelles: Terre d’Accueil? marks an exceptional, temporary reopening for the museum, after it was closed to the public following a tragic shooting in May 2014. 82  |  Issue 49  |  January 2018

A collaboration with the Archives de l’Etat (Belgian state archives) and the Centre for Judeo-Moroccan Culture, it is one of the most important ‘MIXITY.brussels’ events. The exhibition is curated by Pascale Alhadeff, Bruno Benvindo and Chantal Kesteloot. Spread over two buildings, the trilingual expo (French, Dutch and English), explores how the Belgian capital transformed into the multicultural city it is today, via the personal testimonies of immigrants, their family photographs and the objects they brought with them.

It is surprising there is not a museum dedicated to immigration in Brussels, given that it is home to so many nationalities: Bruxelles: Terre d’Accueil? allows the public to discover different trajectories through 16 portraits as part of a contemporary exhibition, where 16 witnesses from around the world were filmed. With their words, their accents and their points of view, they tell their life journey and what Brussels represents for them. Coming from Sudan, China, Congo, France, Brazil, Sweden or Syria, they were all born elsewhere.

“We look at all groups, not just Jews, even if the historical aspect highlights the different waves which shaped the capital, including Jewish immigration to Belgium. It retraces the itinerary of those who found refuge in Brussels, such as Karl Marx or Leonidas Kestekides, and lesser known people. This

Bruxelles: Terre d’Accueil? presents the different waves of immigration the city has known since 1830 and asks the important question of whether Brussels was a ‘welcoming land’ for them - note there is a question mark in the exhibition’s title.