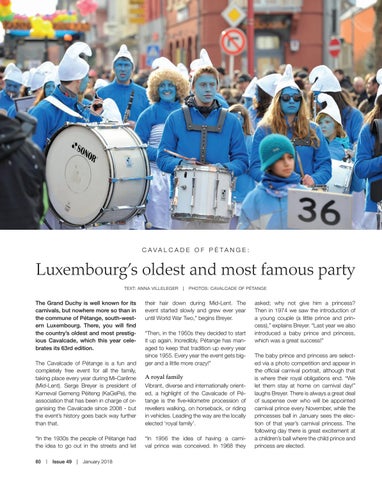 The Grand Duchy is well known for its carnivals, but nowhere more so than in the commune of Pétange, south-western Luxembourg. There, you will find the country’s oldest and most prestigious Cavalcade, which this year celebrates its 63rd edition. The Cavalcade of Pétange is a fun and completely free event for all the family, taking place every year during Mi-Carême (Mid-Lent). Serge Breyer is president of Karneval Gemeng Péiteng (KaGePe), the association that has been in charge of organising the Cavalcade since 2008 - but the event’s history goes back way further than that. “In the 1930s the people of Pétange had the idea to go out in the streets and let 80  |  Issue 49  |  January 2018

their hair down during Mid-Lent. The event started slowly and grew ever year until World War Two,” begins Breyer. “Then, in the 1950s they decided to start it up again. Incredibly, Pétange has managed to keep that tradition up every year since 1955. Every year the event gets bigger and a little more crazy!”

A royal family Vibrant, diverse and internationally oriented, a highlight of the Cavalcade of Pétange is the five-kilometre procession of revellers walking, on horseback, or riding in vehicles. Leading the way are the locally elected ‘royal family’. “In 1956 the idea of having a carnival prince was conceived. In 1968 they