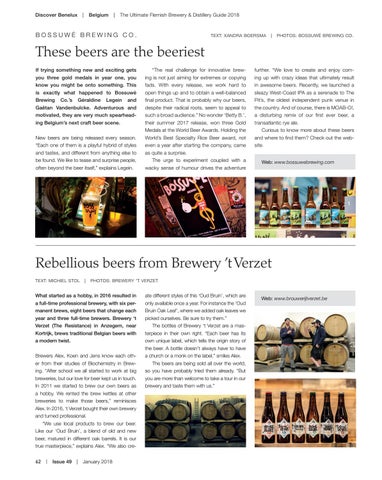 These beers are the beeriest If trying something new and exciting gets you three gold medals in year one, you know you might be onto something. This is exactly what happened to Bossuwé Brewing Co.’s Géraldine Legein and Gaëtan Vandenbulcke. Adventurous and motivated, they are very much spearheading Belgium’s next craft beer scene. New beers are being released every season. “Each one of them is a playful hybrid of styles and tastes, and different from anything else to be found. We like to tease and surprise people, often beyond the beer itself,” explains Legein.

“The real challenge for innovative brewing is not just aiming for extremes or copying fads. With every release, we work hard to open things up and to obtain a well-balanced final product. That is probably why our beers, despite their radical roots, seem to appeal to such a broad audience.” No wonder ‘Betty B.’, their summer 2017 release, won three Gold Medals at the World Beer Awards. Holding the World’s Best Specialty Rice Beer award, not even a year after starting the company, came as quite a surprise. The urge to experiment coupled with a wacky sense of humour drives the adventure

further. “We love to create and enjoy coming up with crazy ideas that ultimately result in awesome beers. Recently, we launched a sleazy West-Coast IPA as a serenade to The Pit’s, the oldest independent punk venue in the country. And of course, there is MOAB-O!, a disturbing remix of our first ever beer, a transatlantic rye ale. Curious to know more about these beers and where to find them? Check out the website. Web: www.bossuwebrewing.com

What started as a hobby, in 2016 resulted in a full-time professional brewery, with six permanent brews, eight beers that change each year and three full-time brewers. Brewery ‘t Verzet (The Resistance) in Anzegem, near Kortrijk, brews traditional Belgian beers with a modern twist. Brewers Alex, Koen and Jens know each other from their studies of Biochemistry in Brewing. “After school we all started to work at big breweries, but our love for beer kept us in touch. In 2011 we started to brew our own beers as a hobby. We rented the brew kettles at other breweries to make those beers,” reminisces Alex. In 2016, ‘t Verzet bought their own brewery and turned professional. “We use local products to brew our beer. Like our ‘Oud Bruin’, a blend of old and new beer, matured in different oak barrels. It is our true masterpiece,” explains Alex. “We also cre62  |  Issue 49  |  January 2018

ate different styles of this ‘Oud Bruin’, which are only available once a year. For instance the ‘Oud Bruin Oak Leaf’, where we added oak leaves we picked ourselves. Be sure to try them.” The bottles of Brewery ‘t Verzet are a masterpiece in their own right. “Each beer has its own unique label, which tells the origin story of the beer. A bottle doesn’t always have to have a church or a monk on the label,” smiles Alex. The beers are being sold all over the world, so you have probably tried them already. “But you are more than welcome to take a tour in our brewery and taste them with us.”