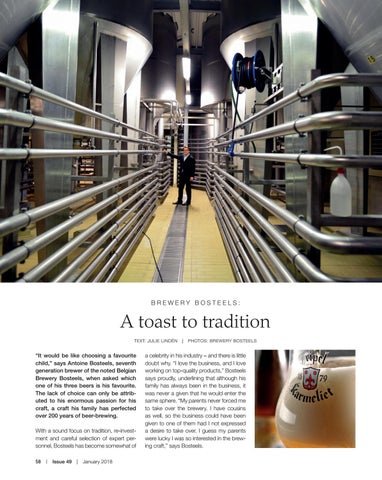 “It would be like choosing a favourite child,” says Antoine Bosteels, seventh generation brewer of the noted Belgian Brewery Bosteels, when asked which one of his three beers is his favourite. The lack of choice can only be attributed to his enormous passion for his craft, a craft his family has perfected over 200 years of beer-brewing. With a sound focus on tradition, re-investment and careful selection of expert personnel, Bosteels has become somewhat of 58  |  Issue 49  |  January 2018

a celebrity in his industry – and there is little doubt why. “I love the business, and I love working on top-quality products,” Bosteels says proudly, underlining that although his family has always been in the business, it was never a given that he would enter the same sphere. “My parents never forced me to take over the brewery. I have cousins as well, so the business could have been given to one of them had I not expressed a desire to take over. I guess my parents were lucky I was so interested in the brewing craft,” says Bosteels.