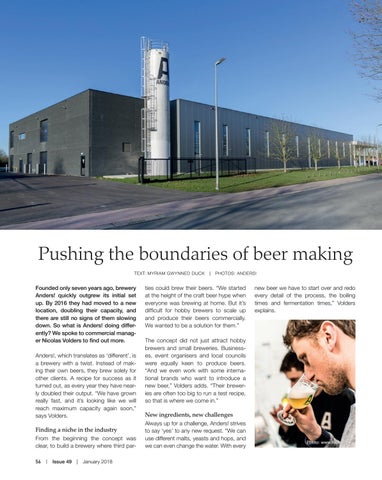 Founded only seven years ago, brewery Anders! quickly outgrew its initial set up. By 2016 they had moved to a new location, doubling their capacity, and there are still no signs of them slowing down. So what is Anders! doing differently? We spoke to commercial manager Nicolas Volders to find out more. Anders!, which translates as ‘different’, is a brewery with a twist. Instead of making their own beers, they brew solely for other clients. A recipe for success as it turned out, as every year they have nearly doubled their output. “We have grown really fast, and it’s looking like we will reach maximum capacity again soon,” says Volders.

Finding a niche in the industry From the beginning the concept was clear, to build a brewery where third par56  |  Issue 49  |  January 2018

ties could brew their beers. “We started at the height of the craft beer hype when everyone was brewing at home. But it’s difficult for hobby brewers to scale up and produce their beers commercially. We wanted to be a solution for them.”

new beer we have to start over and redo every detail of the process, the boiling times and fermentation times,” Volders explains.

The concept did not just attract hobby brewers and small breweries. Businesses, event organisers and local councils were equally keen to produce beers. “And we even work with some international brands who want to introduce a new beer,” Volders adds. “Their breweries are often too big to run a test recipe, so that is where we come in.”

New ingredients, new challenges Always up for a challenge, Anders! strives to say ‘yes’ to any new request. “We can use different malts, yeasts and hops, and we can even change the water. With every