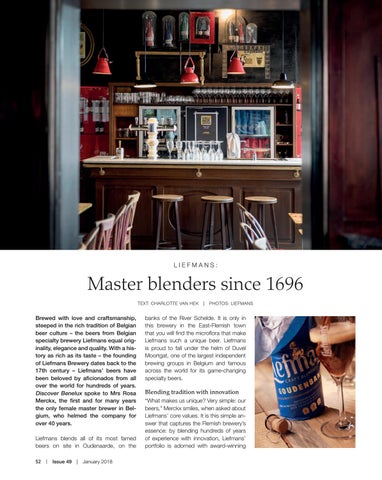 Brewed with love and craftsmanship, steeped in the rich tradition of Belgian beer culture – the beers from Belgian specialty brewery Liefmans equal originality, elegance and quality. With a history as rich as its taste – the founding of Liefmans Brewery dates back to the 17th century – Liefmans’ beers have been beloved by aficionados from all over the world for hundreds of years. Discover Benelux spoke to Mrs Rosa Merckx, the first and for many years the only female master brewer in Belgium, who helmed the company for over 40 years. Liefmans blends all of its most famed beers on site in Oudenaarde, on the 52  |  Issue 49  |  January 2018

banks of the River Schelde. It is only in this brewery in the East-Flemish town that you will find the microflora that make Liefmans such a unique beer. Liefmans is proud to fall under the helm of Duvel Moortgat, one of the largest independent brewing groups in Belgium and famous across the world for its game-changing specialty beers.

Blending tradition with innovation “What makes us unique? Very simple: our beers,” Merckx smiles, when asked about Liefmans’ core values. It is this simple answer that captures the Flemish brewery’s essence: by blending hundreds of years of experience with innovation, Liefmans’ portfolio is adorned with award-winning