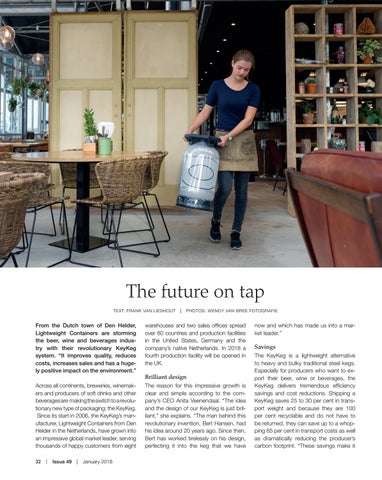 From the Dutch town of Den Helder, Lightweight Containers are storming the beer, wine and beverages industry with their revolutionary KeyKeg system. “It improves quality, reduces costs, increases sales and has a hugely positive impact on the environment.” Across all continents, breweries, winemakers and producers of soft drinks and other beverages are making the switch to a revolutionary new type of packaging: the KeyKeg. Since its start in 2006, the KeyKeg’s manufacturer, Lightweight Containers from Den Helder in the Netherlands, have grown into an impressive global market leader, serving thousands of happy customers from eight 32  |  Issue 49  |  January 2018

warehouses and two sales offices spread over 80 countries and production facilities in the United States, Germany and the company’s native Netherlands. In 2018 a fourth production facility will be opened in the UK.

Brilliant design The reason for this impressive growth is clear and simple according to the company’s CEO Anita Veenendaal. “The idea and the design of our KeyKeg is just brilliant,” she explains. “The man behind this revolutionary invention, Bert Hansen, had his idea around 20 years ago. Since then, Bert has worked tirelessly on his design, perfecting it into the keg that we have

now and which has made us into a market leader.”

Savings The KeyKeg is a lightweight alternative to heavy and bulky traditional steel kegs. Especially for producers who want to export their beer, wine or beverages, the KeyKeg delivers tremendous efficiency savings and cost reductions. Shipping a KeyKeg saves 25 to 30 per cent in transport weight and because they are 100 per cent recyclable and do not have to be returned, they can save up to a whopping 65 per cent in transport costs as well as dramatically reducing the producer’s carbon footprint. “These savings make it