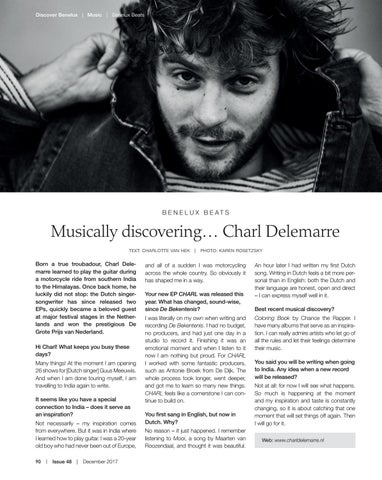 Born a true troubadour, Charl Delemarre learned to play the guitar during a motorcycle ride from southern India to the Himalayas. Once back home, he luckily did not stop: the Dutch singersongwriter has since released two EPs, quickly became a beloved guest at major festival stages in the Netherlands and won the prestigious De Grote Prijs van Nederland. Hi Charl! What keeps you busy these days? Many things! At the moment I am opening 26 shows for [Dutch singer] Guus Meeuwis. And when I am done touring myself, I am travelling to India again to write. It seems like you have a special connection to India – does it serve as an inspiration? Not necessarily – my inspiration comes from everywhere. But it was in India where I learned how to play guitar. I was a 20-year old boy who had never been out of Europe, 90  |  Issue 48  |  December 2017

and all of a sudden I was motorcycling across the whole country. So obviously it has shaped me in a way. Your new EP CHARL was released this year. What has changed, sound-wise, since De Bekentenis? I was literally on my own when writing and recording De Bekentenis. I had no budget, no producers, and had just one day in a studio to record it. Finishing it was an emotional moment and when I listen to it now I am nothing but proud. For CHARL I worked with some fantastic producers, such as Antonie Broek from De Dijk. The whole process took longer, went deeper, and got me to learn so many new things. CHARL feels like a cornerstone I can continue to build on. You first sang in English, but now in Dutch. Why? No reason – it just happened. I remember listening to Mooi, a song by Maarten van Roozendaal, and thought it was beautiful.

An hour later I had written my first Dutch song. Writing in Dutch feels a bit more personal than in English: both the Dutch and their language are honest, open and direct – I can express myself well in it. Best recent musical discovery? Coloring Book by Chance the Rapper. I have many albums that serve as an inspiration. I can really admire artists who let go of all the rules and let their feelings determine their music. You said you will be writing when going to India. Any idea when a new record will be released? Not at all: for now I will see what happens. So much is happening at the moment and my inspiration and taste is constantly changing, so it is about catching that one moment that will set things off again. Then I will go for it. Web: www.charldelemarre.nl