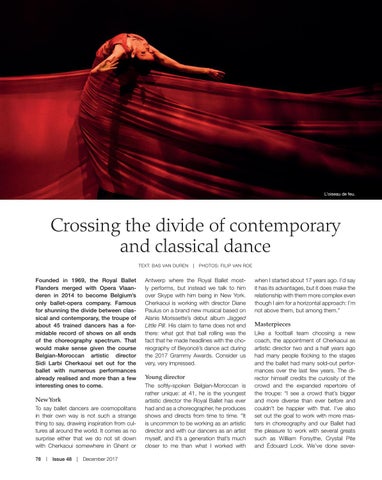 Founded in 1969, the Royal Ballet Flanders merged with Opera Vlaanderen in 2014 to become Belgium’s only ballet-opera company. Famous for shunning the divide between classical and contemporary, the troupe of about 45 trained dancers has a formidable record of shows on all ends of the choreography spectrum. That would make sense given the course Belgian-Moroccan artistic director Sidi Larbi Cherkaoui set out for the ballet with numerous performances already realised and more than a few interesting ones to come.

New York To say ballet dancers are cosmopolitans in their own way is not such a strange thing to say, drawing inspiration from cultures all around the world. It comes as no surprise either that we do not sit down with Cherkaoui somewhere in Ghent or 78  |  Issue 48  |  December 2017

Antwerp where the Royal Ballet mostly performs, but instead we talk to him over Skype with him being in New York. Cherkaoui is working with director Diane Paulus on a brand new musical based on Alanis Morissette’s debut album Jagged Little Pill. His claim to fame does not end there: what got that ball rolling was the fact that he made headlines with the choreography of Beyoncé’s dance act during the 2017 Grammy Awards. Consider us very, very impressed.

Young director The softly-spoken Belgian-Moroccan is rather unique: at 41, he is the youngest artistic director the Royal Ballet has ever had and as a choreographer, he produces shows and directs from time to time. “It is uncommon to be working as an artistic director and with our dancers as an artist myself, and it’s a generation that’s much closer to me than what I worked with

when I started about 17 years ago. I’d say it has its advantages, but it does make the relationship with them more complex even though I aim for a horizontal approach: I’m not above them, but among them.”

Masterpieces Like a football team choosing a new coach, the appointment of Cherkaoui as artistic director two and a half years ago had many people flocking to the stages and the ballet had many sold-out performances over the last few years. The director himself credits the curiosity of the crowd and the expanded repertoire of the troupe: “I see a crowd that’s bigger and more diverse than ever before and couldn’t be happier with that. I’ve also set out the goal to work with more masters in choreography and our Ballet had the pleasure to work with several greats such as William Forsythe, Crystal Pite and Édouard Lock. We’ve done sever-