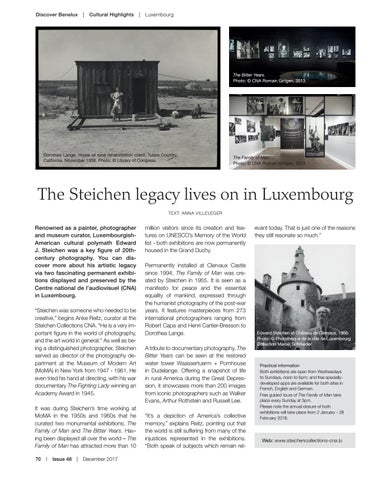 The Steichen legacy lives on in Luxembourg TEXT: ANNA VILLELEGER

Renowned as a painter, photographer and museum curator, LuxembourgishAmerican cultural polymath Edward J. Steichen was a key figure of 20thcentury photography. You can discover more about his artistic legacy via two fascinating permanent exhibitions displayed and preserved by the Centre national de l’audiovisuel (CNA) in Luxembourg. “Steichen was someone who needed to be creative,” begins Anke Reitz, curator at the Steichen Collections CNA. “He is a very important figure in the world of photography, and the art world in general.” As well as being a distinguished photographer, Steichen served as director of the photography department at the Museum of Modern Art (MoMA) in New York from 1947 - 1961. He even tried his hand at directing, with his war documentary The Fighting Lady winning an Academy Award in 1945. It was during Steichen’s time working at MoMA in the 1950s and 1960s that he curated two monumental exhibitions; The Family of Man and The Bitter Years. Having been displayed all over the world – The Family of Man has attracted more than 10 70  |  Issue 48  |  December 2017

million visitors since its creation and features on UNESCO’s Memory of the World list - both exhibitions are now permanently housed in the Grand Duchy. Permanently installed at Clervaux Castle since 1994, The Family of Man was created by Steichen in 1955. It is seen as a manifesto for peace and the essential equality of mankind, expressed through the humanist photography of the post-war years. It features masterpieces from 273 international photographers ranging from Robert Capa and Henri Cartier-Bresson to Dorothea Lange. A tribute to documentary photography, The Bitter Years can be seen at the restored water tower Waassertuerm + Pomhouse in Dudelange. Offering a snapshot of life in rural America during the Great Depression, it showcases more than 200 images from iconic photographers such as Walker Evans, Arthur Rothstein and Russell Lee. “It’s a depiction of America’s collective memory,” explains Reitz, pointing out that the world is still suffering from many of the injustices represented in the exhibitions. “Both speak of subjects which remain rel-

evant today. That is just one of the reasons they still resonate so much.”

Practical information Both exhibitions are open from Wednesdays to Sundays, noon to 6pm; and free speciallydeveloped apps are available for both sites in French, English and German. Free guided tours of The Family of Man take place every Sunday at 3pm. Please note the annual closure of both exhibitions will take place from 2 January - 28 February 2018.