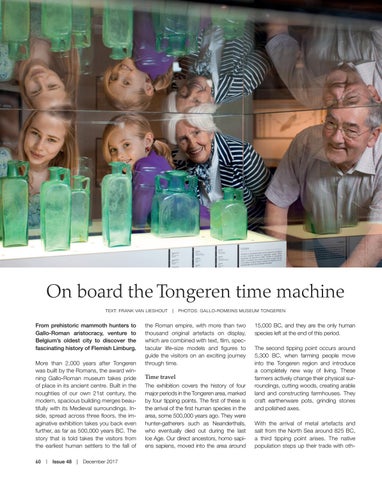 From prehistoric mammoth hunters to Gallo-Roman aristocracy, venture to Belgium’s oldest city to discover the fascinating history of Flemish Limburg. More than 2,000 years after Tongeren was built by the Romans, the award winning Gallo-Roman museum takes pride of place in its ancient centre. Built in the noughties of our own 21st century, the modern, spacious building merges beautifully with its Medieval surroundings. Inside, spread across three floors, the imaginative exhibition takes you back even further, as far as 500,000 years BC. The story that is told takes the visitors from the earliest human settlers to the fall of 60  |  Issue 48  |  December 2017

the Roman empire, with more than two thousand original artefacts on display, which are combined with text, film, spectacular life-size models and figures to guide the visitors on an exciting journey through time.

Time travel The exhibition covers the history of four major periods in the Tongeren area, marked by four tipping points. The first of these is the arrival of the first human species in the area, some 500,000 years ago. They were hunter-gatherers such as Neanderthals, who eventually died out during the last Ice Age. Our direct ancestors, homo sapiens sapiens, moved into the area around

15,000 BC, and they are the only human species left at the end of this period. The second tipping point occurs around 5,300 BC, when farming people move into the Tongeren region and introduce a completely new way of living. These farmers actively change their physical surroundings, cutting woods, creating arable land and constructing farmhouses. They craft earthenware pots, grinding stones and polished axes. With the arrival of metal artefacts and salt from the North Sea around 825 BC, a third tipping point arises. The native population steps up their trade with oth-