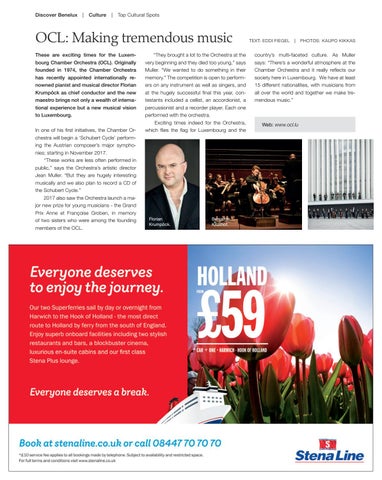 OCL: Making tremendous music These are exciting times for the Luxembourg Chamber Orchestra (OCL). Originally founded in 1974, the Chamber Orchestra has recently appointed internationally renowned pianist and musical director Florian Krumpöck as chief conductor and the new maestro brings not only a wealth of international experience but a new musical vision to Luxembourg. In one of his first initiatives, the Chamber Orchestra will begin a ‘Schubert Cycle’ performing the Austrian composer’s major symphonies; starting in November 2017. “These works are less often performed in public,” says the Orchestra’s artistic director Jean Muller. “But they are hugely interesting musically and we also plan to record a CD of the Schubert Cycle.” 2017 also saw the Orchestra launch a major new prize for young musicians - the Grand Prix Anne et Françoise Groben, in memory of two sisters who were among the founding members of the OCL.

“They brought a lot to the Orchestra at the very beginning and they died too young,” says Muller. “We wanted to do something in their memory.” The competition is open to performers on any instrument as well as singers, and at the hugely successful final this year, contestants included a cellist, an accordionist, a percussionist and a recorder player. Each one performed with the orchestra. Exciting times indeed for the Orchestra, which flies the flag for Luxembourg and the

country’s multi-faceted culture. As Muller says: “There’s a wonderful atmosphere at the Chamber Orchestra and it really reflects our society here in Luxembourg. We have at least 15 different nationalities, with musicians from all over the world and together we make tremendous music.”