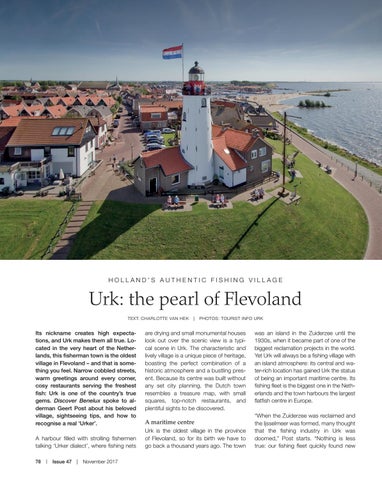 are drying and small monumental houses look out over the scenic view is a typical scene in Urk. The characteristic and lively village is a unique piece of heritage, boasting the perfect combination of a historic atmosphere and a bustling present. Because its centre was built without any set city planning, the Dutch town resembles a treasure map, with small squares, top-notch restaurants, and plentiful sights to be discovered.

Its nickname creates high expectations, and Urk makes them all true. Located in the very heart of the Netherlands, this fisherman town is the oldest village in Flevoland – and that is something you feel. Narrow cobbled streets, warm greetings around every corner, cosy restaurants serving the freshest fish: Urk is one of the country’s true gems. Discover Benelux spoke to alderman Geert Post about his beloved village, sightseeing tips, and how to recognise a real ‘Urker’.

Urk is the oldest village in the province of Flevoland, so for its birth we have to go back a thousand years ago. The town

was an island in the Zuiderzee until the 1930s, when it became part of one of the biggest reclamation projects in the world. Yet Urk will always be a fishing village with an island atmosphere: its central and water-rich location has gained Urk the status of being an important maritime centre. Its fishing fleet is the biggest one in the Netherlands and the town harbours the largest flatfish centre in Europe. “When the Zuiderzee was reclaimed and the Ijsselmeer was formed, many thought that the fishing industry in Urk was doomed,” Post starts. “Nothing is less true: our fishing fleet quickly found new