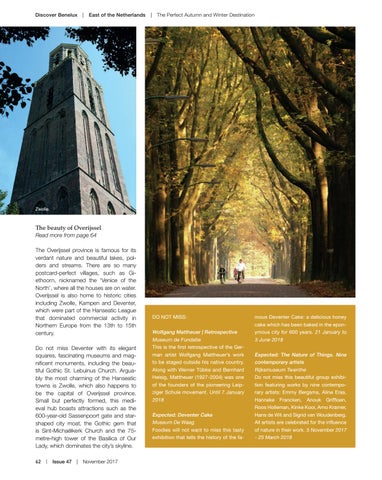 The beauty of Overijssel Read more from page 64 The Overijssel province is famous for its verdant nature and beautiful lakes, polders and streams. There are so many postcard-perfect villages, such as Giethoorn, nicknamed the ‘Venice of the North’, where all the houses are on water. Overijssel is also home to historic cities including Zwolle, Kampen and Deventer, which were part of the Hanseatic League that dominated commercial activity in Northern Europe from the 13th to 15th century. Do not miss Deventer with its elegant squares, fascinating museums and magnificent monuments, including the beautiful Gothic St. Lebuinus Church. Arguably the most charming of the Hanseatic towns is Zwolle, which also happens to be the capital of Overijssel province. Small but perfectly formed, this medieval hub boasts attractions such as the 600-year-old Sassenpoort gate and starshaped city moat, the Gothic gem that is Sint-Michaëlkerk Church and the 75metre-high tower of the Basilica of Our Lady, which dominates the city’s skyline. 62  |  Issue 47  |  November 2017

Wolfgang Mattheuer | Retrospective Museum de Fundatie This is the first retrospective of the German artist Wolfgang Mattheuer’s work to be staged outside his native country. Along with Werner Tübke and Bernhard Heisig, Mattheuer (1927-2004) was one of the founders of the pioneering Leipziger Schule movement. Until 7 January 2018 Expected: Deventer Cake Museum De Waag Foodies will not want to miss this tasty exhibition that tells the history of the fa-

mous Deventer Cake: a delicious honey cake which has been baked in the eponymous city for 600 years. 21 January to 3 June 2018