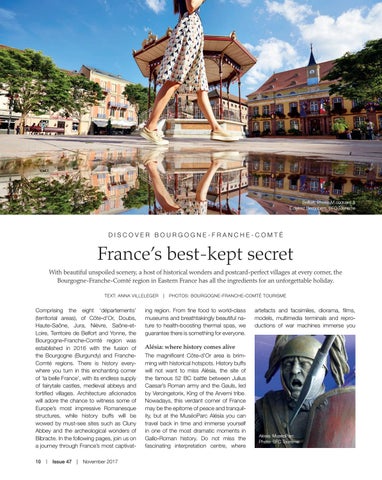 France’s best-kept secret With beautiful unspoiled scenery, a host of historical wonders and postcard-perfect villages at every corner, the Bourgogne-Franche-Comté region in Eastern France has all the ingredients for an unforgettable holiday. TEXT: ANNA VILLELEGER  |  PHOTOS: BOURGOGNE-FRANCHE-COMTÉ TOURISME

Comprising the eight ‘départements’ (territorial areas), of Côte-d’Or, Doubs, Haute-Saône, Jura, Nièvre, Saône-etLoire, Territoire de Belfort and Yonne, the Bourgogne-Franche-Comté region was established in 2016 with the fusion of the Bourgogne (Burgundy) and FrancheComté regions. There is history everywhere you turn in this enchanting corner of ‘la belle France’, with its endless supply of fairytale castles, medieval abbeys and fortified villages. Architecture aficionados will adore the chance to witness some of Europe’s most impressive Romanesque structures, while history buffs will be wowed by must-see sites such as Cluny Abbey and the archeological wonders of Bibracte. In the following pages, join us on a journey through France’s most captivat10  |  Issue 47  |  November 2017

ing region. From fine food to world-class museums and breathtakingly beautiful nature to health-boosting thermal spas, we guarantee there is something for everyone.

Alésia: where history comes alive The magnificent Côte-d’Or area is brimming with historical hotspots. History buffs will not want to miss Alésia, the site of the famous 52 BC battle between Julius Caesar’s Roman army and the Gauls, led by Vercingetorix, King of the Arverni tribe. Nowadays, this verdant corner of France may be the epitome of peace and tranquility, but at the MuséoParc Alésia you can travel back in time and immerse yourself in one of the most dramatic moments in Gallo-Roman history. Do not miss the fascinating interpretation centre, where