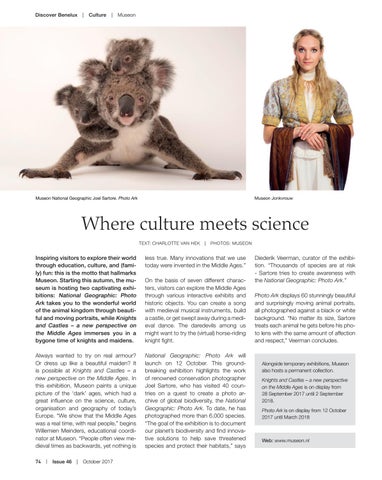 less true. Many innovations that we use today were invented in the Middle Ages.”

Inspiring visitors to explore their world through education, culture, and (family) fun: this is the motto that hallmarks Museon. Starting this autumn, the museum is hosting two captivating exhibitions: National Geographic: Photo Ark takes you to the wonderful world of the animal kingdom through beautiful and moving portraits, while Knights and Castles – a new perspective on the Middle Ages immerses you in a bygone time of knights and maidens.

On the basis of seven different characters, visitors can explore the Middle Ages through various interactive exhibits and historic objects. You can create a song with medieval musical instruments, build a castle, or get swept away during a medieval dance. The daredevils among us might want to try the (virtual) horse-riding knight fight.

Always wanted to try on real armour? Or dress up like a beautiful maiden? It is possible at Knights and Castles – a new perspective on the Middle Ages. In this exhibition, Museon paints a unique picture of the ‘dark’ ages, which had a great influence on the science, culture, organisation and geography of today’s Europe. “We show that the Middle Ages was a real time, with real people,” begins Willemien Meinders, educational coordinator at Museon. “People often view medieval times as backwards, yet nothing is

National Geographic: Photo Ark will launch on 12 October. This groundbreaking exhibition highlights the work of renowned conservation photographer Joel Sartore, who has visited 40 countries on a quest to create a photo archive of global biodiversity, the National Geographic: Photo Ark. To date, he has photographed more than 6,000 species. “The goal of the exhibition is to document our planet’s biodiversity and find innovative solutions to help save threatened species and protect their habitats,” says

Diederik Veerman, curator of the exhibition. “Thousands of species are at risk - Sartore tries to create awareness with the National Geographic: Photo Ark.” Photo Ark displays 60 stunningly beautiful and surprisingly moving animal portraits, all photographed against a black or white background. “No matter its size, Sartore treats each animal he gets before his photo lens with the same amount of affection and respect,” Veerman concludes.