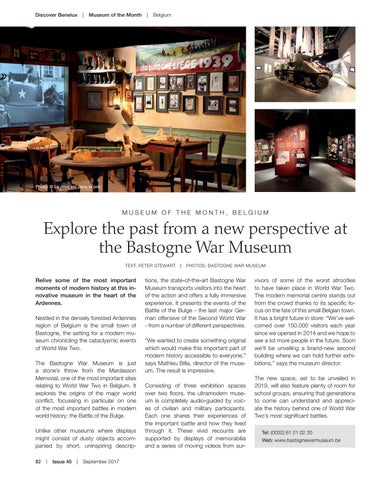 MUSEUM OF THE MONTH, BELGIUM

Explore the past from a new perspective at the Bastogne War Museum TEXT: PETER STEWART  |  PHOTOS: BASTOGNE WAR MUSEUM

Relive some of the most important moments of modern history at this innovative museum in the heart of the Ardennes. Nestled in the densely forested Ardennes region of Belgium is the small town of Bastogne, the setting for a modern museum chronicling the cataclysmic events of World War Two. The Bastogne War Museum is just a stone’s throw from the Mardasson Memorial, one of the most important sites relating to World War Two in Belgium. It explores the origins of the major world conflict, focussing in particular on one of the most important battles in modern world history: the Battle of the Bulge. Unlike other museums where displays might consist of dusty objects accompanied by short, uninspiring descrip82  |  Issue 45  |  September 2017

tions, the state-of-the-art Bastogne War Museum transports visitors into the heart of the action and offers a fully immersive experience. It presents the events of the Battle of the Bulge - the last major German offensive of the Second World War - from a number of different perspectives. “We wanted to create something original which would make this important part of modern history accessible to everyone,” says Mathieu Billa, director of the museum. The result is impressive. Consisting of three exhibition spaces over two floors, the ultramodern museum is completely audio-guided by voices of civilian and military participants. Each one shares their experiences of the important battle and how they lived through it. These vivid recounts are supported by displays of memorabilia and a series of moving videos from sur-

vivors of some of the worst atrocities to have taken place in World War Two. The modern memorial centre stands out from the crowd thanks to its specific focus on the fate of this small Belgian town. It has a bright future in store: “We’ve welcomed over 150,000 visitors each year since we opened in 2014 and we hope to see a lot more people in the future. Soon we’ll be unveiling a brand-new second building where we can hold further exhibitions,” says the museum director. The new space, set to be unveiled in 2019, will also feature plenty of room for school groups, ensuring that generations to come can understand and appreciate the history behind one of World War Two’s most significant battles. Tel: (0032) 61 21 02 20 Web: www.bastognewarmuseum.be