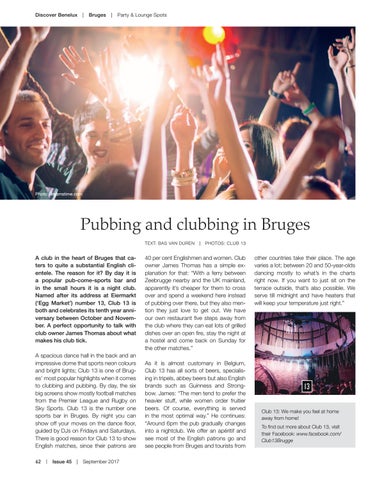 A club in the heart of Bruges that caters to quite a substantial English clientele. The reason for it? By day it is a popular pub-come-sports bar and in the small hours it is a night club. Named after its address at Eiermarkt (‘Egg Market’) number 13, Club 13 is both and celebrates its tenth year anniversary between October and November. A perfect opportunity to talk with club owner James Thomas about what makes his club tick. A spacious dance hall in the back and an impressive dome that sports neon colours and bright lights; Club 13 is one of Bruges’ most popular highlights when it comes to clubbing and pubbing. By day, the six big screens show mostly football matches from the Premier League and Rugby on Sky Sports. Club 13 is the number one sports bar in Bruges. By night you can show off your moves on the dance floor, guided by DJs on Fridays and Saturdays. There is good reason for Club 13 to show English matches, since their patrons are 62  |  Issue 45  |  September 2017

40 per cent Englishmen and women. Club owner James Thomas has a simple explanation for that: “With a ferry between Zeebrugge nearby and the UK mainland, apparently it’s cheaper for them to cross over and spend a weekend here instead of pubbing over there, but they also mention they just love to get out. We have our own restaurant five steps away from the club where they can eat lots of grilled dishes over an open fire, stay the night at a hostel and come back on Sunday for the other matches.” As it is almost customary in Belgium, Club 13 has all sorts of beers, specialising in tripels, abbey beers but also English brands such as Guinness and Strongbow. James: “The men tend to prefer the heavier stuff, while women order fruitier beers. Of course, everything is served in the most optimal way.” He continues: “Around 6pm the pub gradually changes into a nightclub. We offer an apéritif and see most of the English patrons go and see people from Bruges and tourists from

other countries take their place. The age varies a lot; between 20 and 50-year-olds dancing mostly to what’s in the charts right now. If you want to just sit on the terrace outside, that’s also possible. We serve till midnight and have heaters that will keep your temperature just right.”

Club 13: We make you feel at home away from home! To find out more about Club 13, visit their Facebook: www.facebook.com/ Club13Brugge