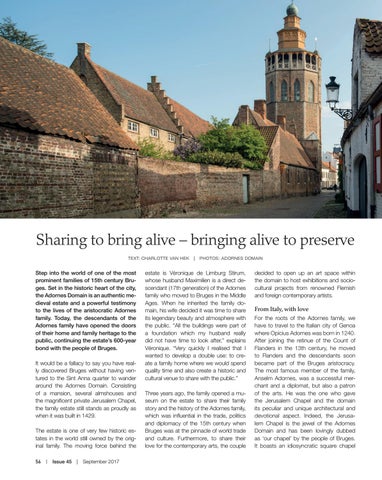 Step into the world of one of the most prominent families of 15th century Bruges. Set in the historic heart of the city, the Adornes Domain is an authentic medieval estate and a powerful testimony to the lives of the aristocratic Adornes family. Today, the descendants of the Adornes family have opened the doors of their home and family heritage to the public, continuing the estate’s 600-year bond with the people of Bruges. It would be a fallacy to say you have really discovered Bruges without having ventured to the Sint Anna quarter to wander around the Adornes Domain. Consisting of a mansion, several almshouses and the magnificent private Jerusalem Chapel, the family estate still stands as proudly as when it was built in 1429. The estate is one of very few historic estates in the world still owned by the original family. The moving force behind the 56  |  Issue 45  |  September 2017

estate is Véronique de Limburg Stirum, whose husband Maximilien is a direct descendant (17th generation) of the Adornes family who moved to Bruges in the Middle Ages. When he inherited the family domain, his wife decided it was time to share its legendary beauty and atmosphere with the public. “All the buildings were part of a foundation which my husband really did not have time to look after,” explains Véronique. “Very quickly I realised that I wanted to develop a double use: to create a family home where we would spend quality time and also create a historic and cultural venue to share with the public.” Three years ago, the family opened a museum on the estate to share their family story and the history of the Adornes family, which was influential in the trade, politics and diplomacy of the 15th century when Bruges was at the pinnacle of world trade and culture. Furthermore, to share their love for the contemporary arts, the couple

decided to open up an art space within the domain to host exhibitions and sociocultural projects from renowned Flemish and foreign contemporary artists.

From Italy, with love For the roots of the Adornes family, we have to travel to the Italian city of Genoa where Opicius Adornes was born in 1240. After joining the retinue of the Count of Flanders in the 13th century, he moved to Flanders and the descendants soon became part of the Bruges aristocracy. The most famous member of the family, Anselm Adornes, was a successful merchant and a diplomat, but also a patron of the arts. He was the one who gave the Jerusalem Chapel and the domain its peculiar and unique architectural and devotional aspect. Indeed, the Jerusalem Chapel is the jewel of the Adornes Domain and has been lovingly dubbed as ‘our chapel’ by the people of Bruges. It boasts an idiosyncratic square chapel