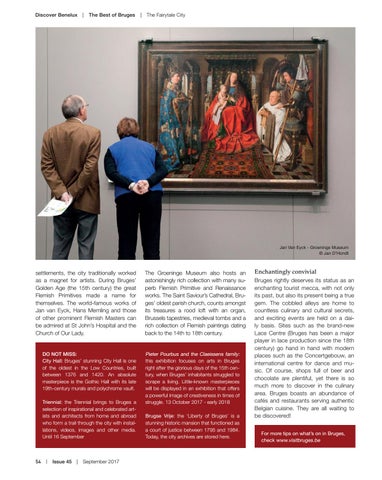 Discover Benelux  |  The Best of Bruges  |  The Fairytale City

settlements, the city traditionally worked as a magnet for artists. During Bruges’ Golden Age (the 15th century) the great Flemish Primitives made a name for themselves. The world-famous works of Jan van Eyck, Hans Memling and those of other prominent Flemish Masters can be admired at St John’s Hospital and the Church of Our Lady.

DO NOT MISS: City Hall: Bruges’ stunning City Hall is one of the oldest in the Low Countries, built between 1376 and 1420. An absolute masterpiece is the Gothic Hall with its late 19th-century murals and polychrome vault. Triennial: the Triennial brings to Bruges a selection of inspirational and celebrated artists and architects from home and abroad who form a trail through the city with installations, videos, images and other media. Until 16 September

The Groeninge Museum also hosts an astonishingly rich collection with many superb Flemish Primitive and Renaissance works. The Saint Saviour’s Cathedral, Bruges’ oldest parish church, counts amongst its treasures a rood loft with an organ, Brussels tapestries, medieval tombs and a rich collection of Flemish paintings dating back to the 14th to 18th century.

Pieter Pourbus and the Claeissens family: this exhibition focuses on arts in Bruges right after the glorious days of the 15th century, when Bruges’ inhabitants struggled to scrape a living. Little-known masterpieces will be displayed in an exhibition that offers a powerful image of creativeness in times of struggle. 13 October 2017 - early 2018 Brugse Vrije: the ‘Liberty of Bruges’ is a stunning historic mansion that functioned as a court of justice between 1795 and 1984. Today, the city archives are stored here.

Enchantingly convivial Bruges rightly deserves its status as an enchanting tourist mecca, with not only its past, but also its present being a true gem. The cobbled alleys are home to countless culinary and cultural secrets, and exciting events are held on a daily basis. Sites such as the brand-new Lace Centre (Bruges has been a major player in lace production since the 18th century) go hand in hand with modern places such as the Concertgebouw, an international centre for dance and music. Of course, shops full of beer and chocolate are plentiful, yet there is so much more to discover in the culinary area. Bruges boasts an abundance of cafés and restaurants serving authentic Belgian cuisine. They are all waiting to be discovered! For more tips on what’s on in Bruges, check www.visitbruges.be