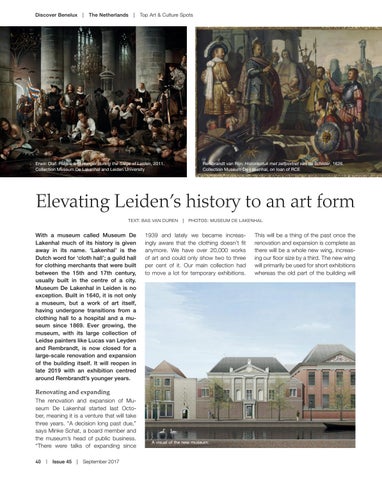 With a museum called Museum De Lakenhal much of its history is given away in its name. ‘Lakenhal’ is the Dutch word for ‘cloth hall’; a guild hall for clothing merchants that were built between the 15th and 17th century, usually built in the centre of a city. Museum De Lakenhal in Leiden is no exception. Built in 1640, it is not only a museum, but a work of art itself, having undergone transitions from a clothing hall to a hospital and a museum since 1869. Ever growing, the museum, with its large collection of Leidse painters like Lucas van Leyden and Rembrandt, is now closed for a large-scale renovation and expansion of the building itself. It will reopen in late 2019 with an exhibition centred around Rembrandt’s younger years.

1939 and lately we became increasingly aware that the clothing doesn’t fit anymore. We have over 20,000 works of art and could only show two to three per cent of it. Our main collection had to move a lot for temporary exhibitions.

Renovating and expanding The renovation and expansion of Museum De Lakenhal started last October, meaning it is a venture that will take three years. “A decision long past due,” says Minke Schat, a board member and the museum’s head of public business. “There were talks of expanding since 40  |  Issue 45  |  September 2017

A visual of the new museum.

This will be a thing of the past once the renovation and expansion is complete as there will be a whole new wing, increasing our floor size by a third. The new wing will primarily be used for short exhibitions whereas the old part of the building will