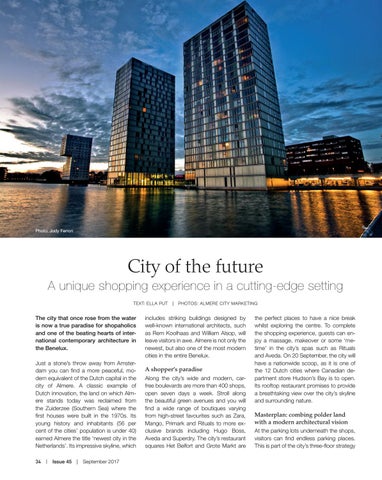 The city that once rose from the water is now a true paradise for shopaholics and one of the beating hearts of international contemporary architecture in the Benelux. Just a stone’s throw away from Amsterdam you can find a more peaceful, modern equivalent of the Dutch capital in the city of Almere. A classic example of Dutch innovation, the land on which Almere stands today was reclaimed from the Zuiderzee (Southern Sea) where the first houses were built in the 1970s. Its young history and inhabitants (56 per cent of the cities’ population is under 40) earned Almere the title ‘newest city in the Netherlands’. Its impressive skyline, which 34  |  Issue 45  |  September 2017

includes striking buildings designed by well-known international architects, such as Rem Koolhaas and William Alsop, will leave visitors in awe. Almere is not only the newest, but also one of the most modern cities in the entire Benelux.

A shopper’s paradise Along the city’s wide and modern, carfree boulevards are more than 400 shops, open seven days a week. Stroll along the beautiful green avenues and you will find a wide range of boutiques varying from high-street favourites such as Zara, Mango, Primark and Rituals to more exclusive brands including Hugo Boss, Aveda and Superdry. The city’s restaurant squares Het Belfort and Grote Markt are

the perfect places to have a nice break whilst exploring the centre. To complete the shopping experience, guests can enjoy a massage, makeover or some ‘metime’ in the city’s spas such as Rituals and Aveda. On 20 September, the city will have a nationwide scoop, as it is one of the 12 Dutch cities where Canadian department store Hudson’s Bay is to open. Its rooftop restaurant promises to provide a breathtaking view over the city’s skyline and surrounding nature.

Masterplan: combing polder land with a modern architectural vision At the parking lots underneath the shops, visitors can find endless parking places. This is part of the city’s three-floor strategy