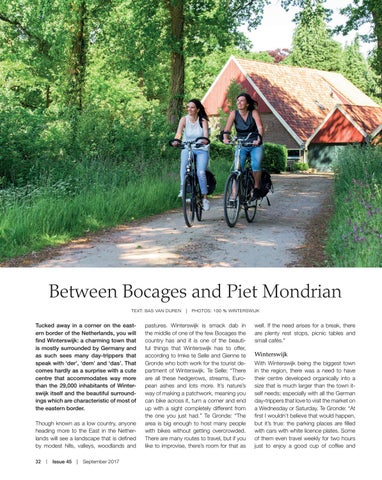 Tucked away in a corner on the eastern border of the Netherlands, you will find Winterswijk: a charming town that is mostly surrounded by Germany and as such sees many day-trippers that speak with ‘der’, ‘dem’ and ‘das’. That comes hardly as a surprise with a cute centre that accommodates way more than the 29,000 inhabitants of Winterswijk itself and the beautiful surroundings which are characteristic of most of the eastern border. Though known as a low country, anyone heading more to the East in the Netherlands will see a landscape that is defined by modest hills, valleys, woodlands and 32  |  Issue 45  |  September 2017

pastures. Winterswijk is smack dab in the middle of one of the few Bocages the country has and it is one of the beautiful things that Winterswijk has to offer, according to Imke te Selle and Gienne te Gronde who both work for the tourist department of Winterswijk. Te Selle: “There are all these hedgerows, streams, European ashes and lots more. It’s nature’s way of making a patchwork, meaning you can bike across it, turn a corner and end up with a sight completely different from the one you just had.” Te Gronde: “The area is big enough to host many people with bikes without getting overcrowded. There are many routes to travel, but if you like to improvise, there’s room for that as

well. If the need arises for a break, there are plenty rest stops, picnic tables and small cafés.”

Winterswijk With Winterswijk being the biggest town in the region, there was a need to have their centre developed organically into a size that is much larger than the town itself needs; especially with all the German day-trippers that love to visit the market on a Wednesday or Saturday. Te Gronde: “At first I wouldn’t believe that would happen, but it’s true: the parking places are filled with cars with white licence plates. Some of them even travel weekly for two hours just to enjoy a good cup of coffee and