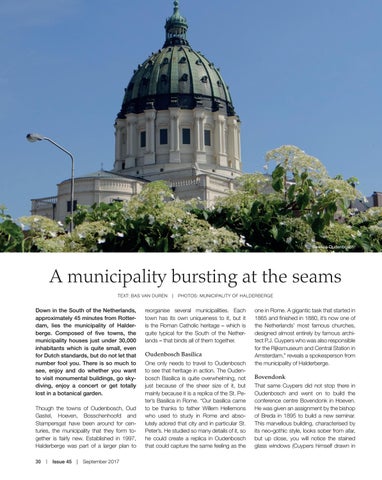 Down in the South of the Netherlands, approximately 45 minutes from Rotterdam, lies the municipality of Halderberge. Composed of five towns, the municipality houses just under 30,000 inhabitants which is quite small, even for Dutch standards, but do not let that number fool you. There is so much to see, enjoy and do whether you want to visit monumental buildings, go skydiving, enjoy a concert or get totally lost in a botanical garden. Though the towns of Oudenbosch, Oud Gastel, Hoeven, Bosschenhoofd and Stampersgat have been around for centuries, the municipality that they form together is fairly new. Established in 1997, Halderberge was part of a larger plan to 30  |  Issue 45  |  September 2017

reorganise several municipalities. Each town has its own uniqueness to it, but it is the Roman Catholic heritage – which is quite typical for the South of the Netherlands – that binds all of them together.

Oudenbosch Basilica One only needs to travel to Oudenbosch to see that heritage in action. The Oudenbosch Basilica is quite overwhelming, not just because of the sheer size of it, but mainly because it is a replica of the St. Peter’s Basilica in Rome. “Our basilica came to be thanks to father Willem Hellemons who used to study in Rome and absolutely adored that city and in particular St. Peter’s. He studied so many details of it, so he could create a replica in Oudenbosch that could capture the same feeling as the

one in Rome. A gigantic task that started in 1865 and finished in 1880, it’s now one of the Netherlands’ most famous churches, designed almost entirely by famous architect P.J. Cuypers who was also responsible for the Rijksmuseum and Central Station in Amsterdam,” reveals a spokesperson from the municipality of Halderberge.

Bovendonk That same Cuypers did not stop there in Oudenbosch and went on to build the conference centre Bovendonk in Hoeven. He was given an assignment by the bishop of Breda in 1895 to build a new seminar. This marvellous building, characterised by its neo-gothic style, looks sober from afar, but up close, you will notice the stained glass windows (Cuypers himself drawn in