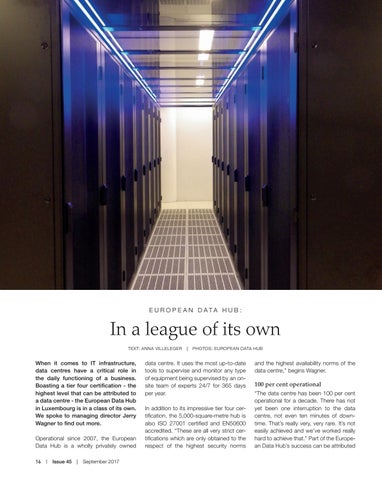 In a league of its own TEXT: ANNA VILLELEGER  |  PHOTOS: EUROPEAN DATA HUB

When it comes to IT infrastructure, data centres have a critical role in the daily functioning of a business. Boasting a tier four certification - the highest level that can be attributed to a data centre - the European Data Hub in Luxembourg is in a class of its own. We spoke to managing director Jerry Wagner to find out more. Operational since 2007, the European Data Hub is a wholly privately owned 16  |  Issue 45  |  September 2017

data centre. It uses the most up-to-date tools to supervise and monitor any type of equipment being supervised by an onsite team of experts 24/7 for 365 days per year. In addition to its impressive tier four certification, the 5,000-square-metre hub is also ISO 27001 certified and EN50600 accredited. “These are all very strict certifications which are only obtained to the respect of the highest security norms

and the highest availability norms of the data centre,” begins Wagner.