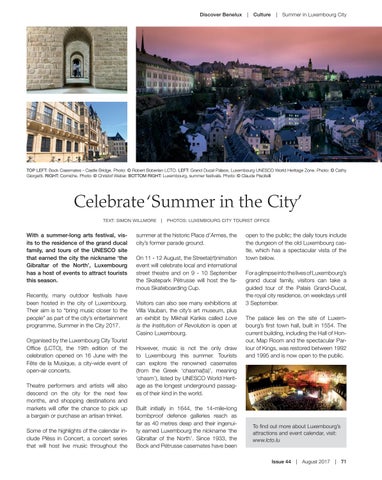 With a summer-long arts festival, visits to the residence of the grand ducal family, and tours of the UNESCO site that earned the city the nickname ‘the Gibraltar of the North’, Luxembourg has a host of events to attract tourists this season. Recently, many outdoor festivals have been hosted in the city of Luxembourg. Their aim is to “bring music closer to the people” as part of the city’s entertainment programme, Summer in the City 2017. Organised by the Luxembourg City Tourist Office (LCTO), the 19th edition of the celebration opened on 16 June with the Fête de la Musique, a city-wide event of open-air concerts. Theatre performers and artists will also descend on the city for the next few months, and shopping destinations and markets will offer the chance to pick up a bargain or purchase an artisan trinket. Some of the highlights of the calendar include Plëss in Concert, a concert series that will host live music throughout the

summer at the historic Place d’Armes, the city’s former parade ground. On 11 - 12 August, the Streeta(rt)nimation event will celebrate local and international street theatre and on 9 - 10 September the Skatepark Pétrusse will host the famous Skateboarding Cup. Visitors can also see many exhibitions at Villa Vauban, the city’s art museum, plus an exhibit by Mikhail Karikis called Love is the Institution of Revolution is open at Casino Luxembourg. However, music is not the only draw to Luxembourg this summer. Tourists can explore the renowned casemates (from the Greek ‘chasma(ta)’, meaning ‘chasm’), listed by UNESCO World Heritage as the longest underground passages of their kind in the world. Built initially in 1644, the 14-mile-long bombproof defence galleries reach as far as 40 metres deep and their ingenuity earned Luxembourg the nickname ‘the Gibraltar of the North’. Since 1933, the Bock and Pétrusse casemates have been

open to the public; the daily tours include the dungeon of the old Luxembourg castle, which has a spectacular vista of the town below. For a glimpse into the lives of Luxembourg’s grand ducal family, visitors can take a guided tour of the Palais Grand-Ducal, the royal city residence, on weekdays until 3 September. The palace lies on the site of Luxembourg’s first town hall, built in 1554. The current building, including the Hall of Honour, Map Room and the spectacular Parlour of Kings, was restored between 1992 and 1995 and is now open to the public.

To find out more about Luxembourg’s attractions and event calendar, visit: www.lcto.lu