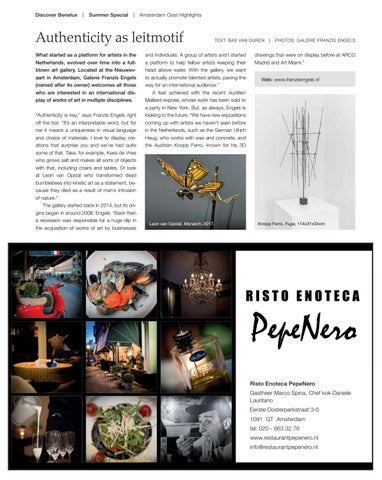 Authenticity as leitmotif What started as a platform for artists in the Netherlands, evolved over time into a fullblown art gallery. Located at the Nieuwevaart in Amsterdam, Galerie Franzis Engels (named after its owner) welcomes all those who are interested in an international display of works of art in multiple disciplines. “Authenticity is key,” says Franzis Engels right off the bat. “It’s an interpretable word, but for me it means a uniqueness in visual language and choice of materials. I love to display creations that surprise you and we’ve had quite some of that. Take, for example, Kees de Vries who grows salt and makes all sorts of objects with that, including chairs and tables. Or look at Leon van Opstal who transformed dead bumblebees into kinetic art as a statement, because they died as a result of man’s intrusion of nature.” The gallery started back in 2014, but its origins began in around 2008. Engels: “Back then a recession was responsible for a huge dip in the acquisition of works of art by businesses

and individuals. A group of artists and I started a platform to help fellow artists keeping their head above water. With the gallery, we want to actually promote talented artists, paving the way for an international audience.” A feat achieved with the recent Aurélien Maillard exposé, whose work has been sold to a party in New York. But, as always, Engels is looking to the future: “We have new expositions coming up with artists we haven’t seen before in the Netherlands, such as the German Ulrich Haug, who works with wax and concrete, and the Austrian Knopp Ferro, known for his 3D

drawings that were on display before at ARCO Madrid and Art Miami.” Web: www.franzisengels.nl