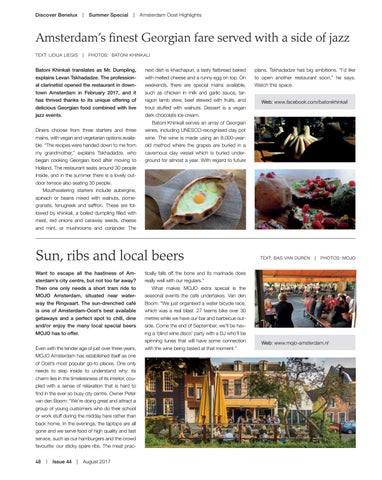 Batoni Khinkali translates as Mr. Dumpling, explains Levan Tskhadadze. The professional clarinetist opened the restaurant in downtown Amsterdam in February 2017, and it has thrived thanks to its unique offering of delicious Georgian food combined with live jazz events. Diners choose from three starters and three mains, with vegan and vegetarian options available. “The recipes were handed down to me from my grandmother,” explains Tskhadadze, who began cooking Georgian food after moving to Holland. The restaurant seats around 30 people inside, and in the summer there is a lovely outdoor terrace also seating 30 people. Mouthwatering starters include aubergine, spinach or beans mixed with walnuts, pomegranate, fenugreek and saffron. These are followed by khinkali, a boiled dumpling filled with meat, red onions and caraway seeds, cheese and mint, or mushrooms and coriander. The

next dish is khachapuri, a tasty flatbread baked with melted cheese and a runny egg on top. On weekends, there are special mains available, such as chicken in milk and garlic sauce, tarragon lamb stew, beef stewed with fruits, and trout stuffed with walnuts. Dessert is a vegan dark chocolate ice cream. Batoni Khinkali serves an array of Georgian wines, including UNESCO-recognised clay pot wine. The wine is made using an 8,000-yearold method where the grapes are buried in a cavernous clay vessel which is buried underground for almost a year. With regard to future

Sun, ribs and local beers Want to escape all the hastiness of Amsterdam’s city centre, but not too far away? Then one only needs a short tram ride to MOJO Amsterdam, situated near waterway the Ringvaart. The sun-drenched café is one of Amsterdam-Oost’s best available getaways and a perfect spot to chill, dine and/or enjoy the many local special beers MOJO has to offer. Even with the tender age of just over three years, MOJO Amsterdam has established itself as one of Oost’s most popular go-to places. One only needs to step inside to understand why: its charm lies in the timelessness of its interior, coupled with a sense of relaxation that is hard to find in the ever so busy city centre. Owner Peter van den Boom: “We’re doing great and attract a group of young customers who do their school or work stuff during the midday here rather than back home. In the evenings, the laptops are all gone and we serve food of high quality and fast service, such as our hamburgers and the crowd favourite: our sticky spare ribs. The meat prac48  |  Issue 44  |  August 2017

tically falls off the bone and its marinade does really well with our regulars.” What makes MOJO extra special is the seasonal events the café undertakes. Van den Boom: “We just organised a water bicycle race, which was a real blast. 27 teams bike over 30 metres while we have our bar and barbecue outside. Come the end of September, we’ll be having a ‘blind wine disco’ party with a DJ who’ll be spinning tunes that will have some connection with the wine being tasted at that moment.”

plans, Tskhadadze has big ambitions. “I’d like to open another restaurant soon,” he says. Watch this space. Web: www.facebook.com/batonikhinkali