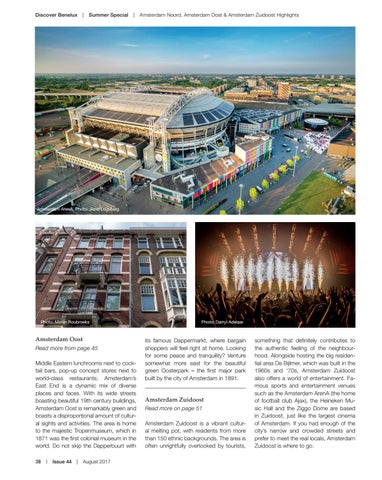 Amsterdam Oost Read more from page 45 Middle Eastern lunchrooms next to cocktail bars, pop-up concept stores next to world-class restaurants: Amsterdam’s East End is a dynamic mix of diverse places and faces. With its wide streets boasting beautiful 19th century buildings, Amsterdam Oost is remarkably green and boasts a disproportional amount of cultural sights and activities. The area is home to the majestic Tropenmuseum, which in 1871 was the first colonial museum in the world. Do not skip the Dapperbuurt with 38  |  Issue 44  |  August 2017

its famous Dappermarkt, where bargain shoppers will feel right at home. Looking for some peace and tranquility? Venture somewhat more east for the beautiful green Oosterpark – the first major park built by the city of Amsterdam in 1891.

something that definitely contributes to the authentic feeling of the neighbourhood. Alongside hosting the big residential area De Bijlmer, which was built in the 1960s and ‘70s, Amsterdam Zuidoost also offers a world of entertainment. Famous sports and entertainment venues such as the Amsterdam ArenA (the home of football club Ajax), the Heineken Music Hall and the Ziggo Dome are based in Zuidoost, just like the largest cinema of Amsterdam. If you had enough of the city’s narrow and crowded streets and prefer to meet the real locals, Amsterdam Zuidoost is where to go.