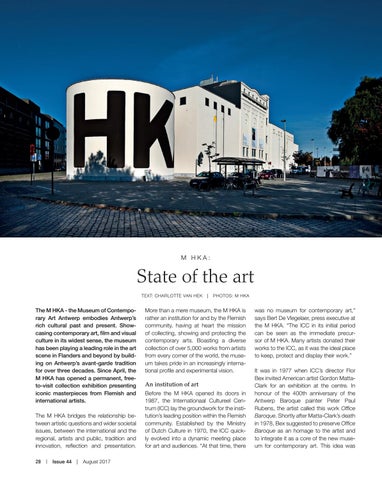 The M HKA - the Museum of Contemporary Art Antwerp embodies Antwerp’s rich cultural past and present. Showcasing contemporary art, film and visual culture in its widest sense, the museum has been playing a leading role in the art scene in Flanders and beyond by building on Antwerp’s avant-garde tradition for over three decades. Since April, the M HKA has opened a permanent, freeto-visit collection exhibition presenting iconic masterpieces from Flemish and international artists. The M HKA bridges the relationship between artistic questions and wider societal issues, between the international and the regional, artists and public, tradition and innovation, reflection and presentation. 28  |  Issue 44  |  August 2017

More than a mere museum, the M HKA is rather an institution for and by the Flemish community, having at heart the mission of collecting, showing and protecting the contemporary arts. Boasting a diverse collection of over 5,000 works from artists from every corner of the world, the museum takes pride in an increasingly international profile and experimental vision.

An institution of art Before the M HKA opened its doors in 1987, the Internationaal Cultureel Centrum (ICC) lay the groundwork for the institution’s leading position within the Flemish community. Established by the Ministry of Dutch Culture in 1970, the ICC quickly evolved into a dynamic meeting place for art and audiences. “At that time, there

was no museum for contemporary art,” says Bert De Vlegelaer, press executive at the M HKA. “The ICC in its initial period can be seen as the immediate precursor of M HKA. Many artists donated their works to the ICC, as it was the ideal place to keep, protect and display their work.” It was in 1977 when ICC’s director Flor Bex invited American artist Gordon MattaClark for an exhibition at the centre. In honour of the 400th anniversary of the Antwerp Baroque painter Peter Paul Rubens, the artist called this work Office Baroque. Shortly after Matta-Clark’s death in 1978, Bex suggested to preserve Office Baroque as an homage to the artist and to integrate it as a core of the new museum for contemporary art. This idea was