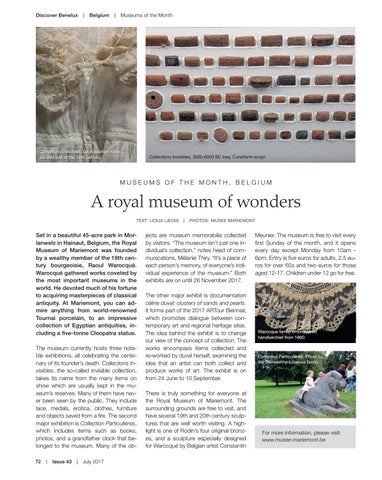 MUSEUMS OF THE MONTH, BELGIUM

Set in a beautiful 45-acre park in Morlanwelz in Hainaut, Belgium, the Royal Museum of Mariemont was founded by a wealthy member of the 19th century bourgeoisie, Raoul Warocqué. Warocqué gathered works coveted by the most important museums in the world. He devoted much of his fortune to acquiring masterpieces of classical antiquity. At Mariemont, you can admire anything from world-renowned Tournai porcelain, to an impressive collection of Egyptian antiquities, including a five-tonne Cleopatra statue. The museum currently hosts three notable exhibitions, all celebrating the centenary of its founder’s death. Collections Invisibles, the so-called invisible collection, takes its name from the many items on show which are usually kept in the museum’s reserves. Many of them have never been seen by the public. They include lace, medals, erotica, clothes, furniture and objects saved from a fire. The second major exhibition is Collection Particulières, which includes items such as books, photos, and a grandfather clock that belonged to the museum. Many of the ob72  |  Issue 43  |  July 2017

jects are museum memorabilia collected by visitors. “The museum isn’t just one individual’s collection,” notes head of communications, Mélanie Thiry. “It’s a place of each person’s memory, of everyone’s individual experience of the museum.” Both exhibits are on until 26 November 2017. The other major exhibit is documentation céline duval: clusters of sands and pearls. It forms part of the 2017 ARTour Biennial, which promotes dialogue between contemporary art and regional heritage sites. The idea behind the exhibit is to change our view of the concept of collection. The works encompass items collected and re-worked by duval herself, examining the idea that an artist can both collect and produce works of art. The exhibit is on from 24 June to 10 September. There is truly something for everyone at the Royal Museum of Mariemont. The surrounding grounds are free to visit, and have several 19th and 20th century sculptures that are well worth visiting. A highlight is one of Rodin’s four original bronzes, and a sculpture especially designed for Warocqué by Belgian artist Constantin

Meunier. The museum is free to visit every first Sunday of the month, and it opens every day except Monday from 10am 6pm. Entry is five euros for adults, 2.5 euros for over 65s and two euros for those aged 12-17. Children under 12 go for free.