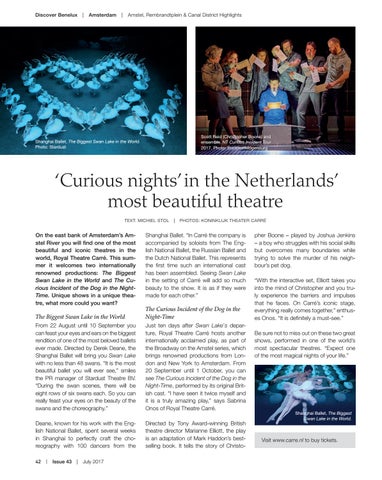 On the east bank of Amsterdam’s Amstel River you will find one of the most beautiful and iconic theatres in the world, Royal Theatre Carré. This summer it welcomes two internationally renowned productions: The Biggest Swan Lake in the World and The Curious Incident of the Dog in the NightTime. Unique shows in a unique theatre, what more could you want?

Shanghai Ballet. “In Carré the company is accompanied by soloists from The English National Ballet, the Russian Ballet and the Dutch National Ballet. This represents the first time such an international cast has been assembled. Seeing Swan Lake in the setting of Carré will add so much beauty to the show. It is as if they were made for each other.”

The Biggest Swan Lake in the World

The Curious Incident of the Dog in the Night-Time

From 22 August until 10 September you can feast your eyes and ears on the biggest rendition of one of the most beloved ballets ever made. Directed by Derek Deane, the Shanghai Ballet will bring you Swan Lake with no less than 48 swans. “It is the most beautiful ballet you will ever see,” smiles the PR manager of Stardust Theatre BV. “During the swan scenes, there will be eight rows of six swans each. So you can really feast your eyes on the beauty of the swans and the choreography.”

Just ten days after Swan Lake’s departure, Royal Theatre Carré hosts another internationally acclaimed play, as part of the Broadway on the Amstel series, which brings renowned productions from London and New York to Amsterdam. From 20 September until 1 October, you can see The Curious Incident of the Dog in the Night-Time, performed by its original British cast. “I have seen it twice myself and it is a truly amazing play,” says Sabrina Onos of Royal Theatre Carré.

Deane, known for his work with the English National Ballet, spent several weeks in Shanghai to perfectly craft the choreography with 100 dancers from the

Directed by Tony Award-winning British theatre director Marianne Elliott, the play is an adaptation of Mark Haddon’s bestselling book. It tells the story of Christo-

pher Boone – played by Joshua Jenkins – a boy who struggles with his social skills but overcomes many boundaries while trying to solve the murder of his neighbour’s pet dog. “With the interactive set, Elliott takes you into the mind of Christopher and you truly experience the barriers and impulses that he faces. On Carré’s iconic stage, everything really comes together,” enthuses Onos. “It is definitely a must-see.” Be sure not to miss out on these two great shows, performed in one of the world’s most spectacular theatres. “Expect one of the most magical nights of your life.”

Shanghai Ballet, The Biggest Swan Lake in the World.