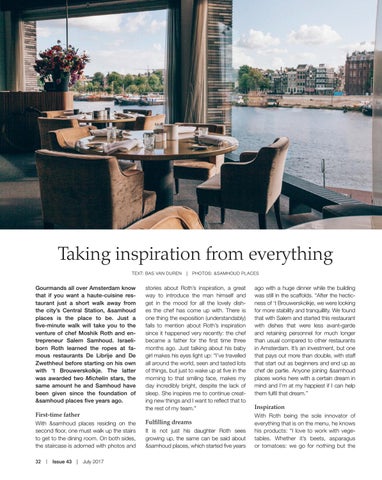 Gourmands all over Amsterdam know that if you want a haute-cuisine restaurant just a short walk away from the city’s Central Station, &samhoud places is the place to be. Just a five-minute walk will take you to the venture of chef Moshik Roth and entrepreneur Salem Samhoud. Israeliborn Roth learned the ropes at famous restaurants De Librije and De Zwethheul before starting on his own with ‘t Brouwerskolkje. The latter was awarded two Michelin stars, the same amount he and Samhoud have been given since the foundation of &samhoud places five years ago.

First-time father With &samhoud places residing on the second floor, one must walk up the stairs to get to the dining room. On both sides, the staircase is adorned with photos and 32  |  Issue 43  |  July 2017

stories about Roth’s inspiration, a great way to introduce the man himself and get in the mood for all the lovely dishes the chef has come up with. There is one thing the exposition (understandably) fails to mention about Roth’s inspiration since it happened very recently: the chef became a father for the first time three months ago. Just talking about his baby girl makes his eyes light up: “I’ve travelled all around the world, seen and tasted lots of things, but just to wake up at five in the morning to that smiling face, makes my day incredibly bright, despite the lack of sleep. She inspires me to continue creating new things and I want to reflect that to the rest of my team.”

Fulfilling dreams It is not just his daughter Roth sees growing up, the same can be said about &samhoud places, which started five years

ago with a huge dinner while the building was still in the scaffolds. “After the hecticness of ‘t Brouwerskolkje, we were looking for more stability and tranquillity. We found that with Salem and started this restaurant with dishes that were less avant-garde and retaining personnel for much longer than usual compared to other restaurants in Amsterdam. It’s an investment, but one that pays out more than double, with staff that start out as beginners and end up as chef de partie. Anyone joining &samhoud places works here with a certain dream in mind and I’m at my happiest if I can help them fulfil that dream.”

Inspiration With Roth being the sole innovator of everything that is on the menu, he knows his products: “I love to work with vegetables. Whether it’s beets, asparagus or tomatoes: we go for nothing but the