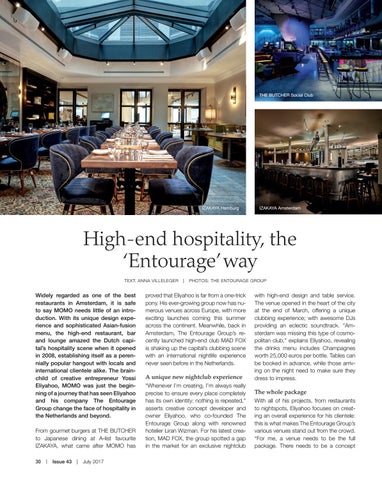 Widely regarded as one of the best restaurants in Amsterdam, it is safe to say MOMO needs little of an introduction. With its unique design experience and sophisticated Asian-fusion menu, the high-end restaurant, bar and lounge amazed the Dutch capital’s hospitality scene when it opened in 2008, establishing itself as a perennially popular hangout with locals and international clientele alike. The brainchild of creative entrepreneur Yossi Eliyahoo, MOMO was just the beginning of a journey that has seen Eliyahoo and his company The Entourage Group change the face of hospitality in the Netherlands and beyond. From gourmet burgers at THE BUTCHER to Japanese dining at A-list favourite IZAKAYA, what came after MOMO has 30  |  Issue 43  |  July 2017

proved that Eliyahoo is far from a one-trick pony. His ever-growing group now has numerous venues across Europe, with more exciting launches coming this summer across the continent. Meanwhile, back in Amsterdam, The Entourage Group’s recently launched high-end club MAD FOX is shaking up the capital’s clubbing scene with an international nightlife experience never seen before in the Netherlands.

A unique new nightclub experience “Whenever I’m creating, I’m always really precise to ensure every place completely has its own identity: nothing is repeated,” asserts creative concept developer and owner Eliyahoo, who co-founded The Entourage Group along with renowned hotelier Liran Wizman. For his latest creation, MAD FOX, the group spotted a gap in the market for an exclusive nightclub

with high-end design and table service. The venue opened in the heart of the city at the end of March, offering a unique clubbing experience; with awesome DJs providing an eclectic soundtrack. “Amsterdam was missing this type of cosmopolitan club,” explains Eliyahoo, revealing the drinks menu includes Champagnes worth 25,000 euros per bottle. Tables can be booked in advance, while those arriving on the night need to make sure they dress to impress.

The whole package With all of his projects, from restaurants to nightspots, Eliyahoo focuses on creating an overall experience for his clientele: this is what makes The Entourage Group’s various venues stand out from the crowd. “For me, a venue needs to be the full package. There needs to be a concept