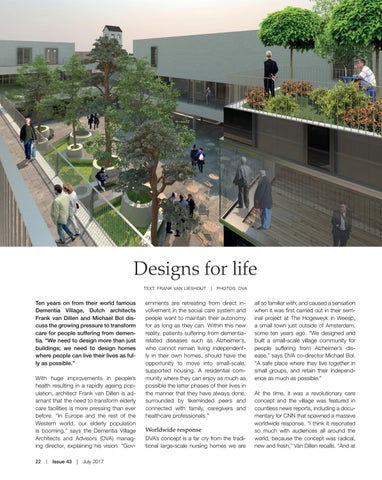 Ten years on from their world famous Dementia Village, Dutch architects Frank van Dillen and Michael Bol discuss the growing pressure to transform care for people suffering from dementia. “We need to design more than just buildings; we need to design homes where people can live their lives as fully as possible.” With huge improvements in people’s health resulting in a rapidly ageing population, architect Frank van Dillen is adamant that the need to transform elderly care facilities is more pressing than ever before. “In Europe and the rest of the Western world, our elderly population is booming,” says the Dementia Village Architects and Advisors (DVA) managing director, explaining his vision. “Gov22  |  Issue 43  |  July 2017

ernments are retreating from direct involvement in the social care system and people want to maintain their autonomy for as long as they can. Within this new reality, patients suffering from dementiarelated diseases such as Alzheimer’s, who cannot remain living independently in their own homes, should have the opportunity to move into small-scale, supported housing. A residential community where they can enjoy as much as possible the latter phases of their lives in the manner that they have always done, surrounded by likeminded peers and connected with family, caregivers and healthcare professionals.”

all so familiar with; and caused a sensation when it was first carried out in their seminal project at The Hogeweyk in Weesp, a small town just outside of Amsterdam, some ten years ago. “We designed and built a small-scale village community for people suffering from Alzheimer’s disease,” says DVA co-director Michael Bol. “A safe place where they live together in small groups, and retain their independence as much as possible.” At the time, it was a revolutionary care concept and the village was featured in countless news reports, including a documentary for CNN that spawned a massive worldwide response. “I think it resonated so much with audiences all around the world, because the concept was radical, new and fresh,” Van Dillen recalls. “And at