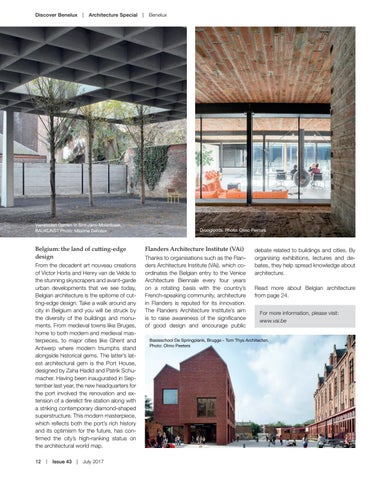 Belgium: the land of cutting-edge design From the decadent art nouveau creations of Victor Horta and Henry van de Velde to the stunning skyscrapers and avant-garde urban developments that we see today, Belgian architecture is the epitome of cutting-edge design. Take a walk around any city in Belgium and you will be struck by the diversity of the buildings and monuments. From medieval towns like Bruges, home to both modern and medieval masterpieces, to major cities like Ghent and Antwerp where modern triumphs stand alongside historical gems. The latter’s latest architectural gem is the Port House, designed by Zaha Hadid and Patrik Schumacher. Having been inaugurated in September last year, the new headquarters for the port involved the renovation and extension of a derelict fire station along with a striking contemporary diamond-shaped superstructure. This modern masterpiece, which reflects both the port’s rich history and its optimism for the future, has confirmed the city’s high-ranking status on the architectural world map. 12  |  Issue 43  |  July 2017