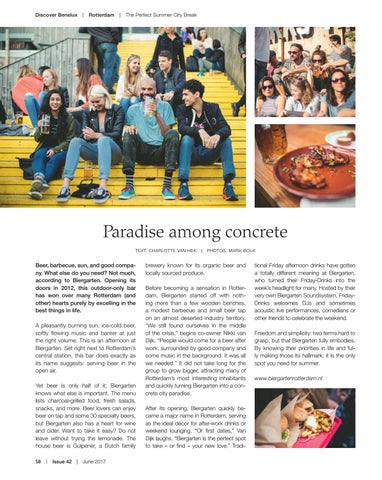 Beer, barbecue, sun, and good company. What else do you need? Not much, according to Biergarten. Opening its doors in 2012, this outdoor-only bar has won over many Rotterdam (and other) hearts purely by excelling in the best things in life. A pleasantly burning sun, ice-cold beer, softly flowing music and banter at just the right volume. This is an afternoon at Biergarten. Set right next to Rotterdam’s central station, this bar does exactly as its name suggests: serving beer in the open air. Yet beer is only half of it; Biergarten knows what else is important. The menu lists charcoal-grilled food, fresh salads, snacks, and more. Beer lovers can enjoy beer on tap and some 30 specialty beers, but Biergarten also has a heart for wine and cider. Want to take it easy? Do not leave without trying the lemonade. The house beer is Gulpener, a Dutch family 58  |  Issue 42  |  June 2017

brewery known for its organic beer and locally sourced produce. Before becoming a sensation in Rotterdam, Biergarten started off with nothing more than a few wooden benches, a modest barbecue and small beer tap on an almost deserted industry territory. “We still found ourselves in the middle of the crisis,” begins co-owner Nikki van Dijk. “People would come for a beer after work, surrounded by good company and some music in the background. It was all we needed.” It did not take long for the group to grow bigger, attracting many of Rotterdam’s most interesting inhabitants and quickly turning Biergarten into a concrete city paradise. After its opening, Biergarten quickly became a major name in Rotterdam, serving as the ideal décor for after-work drinks or weekend lounging. “Or first dates,” Van Dijk laughs. “Biergarten is the perfect spot to take – or find – your new love.” Tradi-

tional Friday afternoon drinks have gotten a totally different meaning at Biergarten, who turned their Friday-Drinks into the week’s headlight for many. Hosted by their very own Biergarten Soundsystem, FridayDrinks welcomes DJs and sometimes acoustic live performances, comedians or other friends to celebrate the weekend. Freedom and simplicity: two terms hard to grasp, but that Biergarten fully embodies. By knowing their priorities in life and fully making those its hallmark, it is the only spot you need for summer. www.biergartenrotterdam.nl