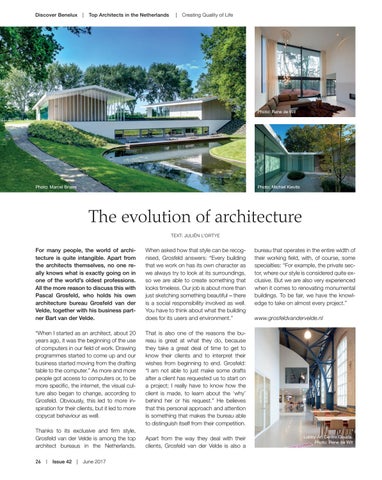 For many people, the world of architecture is quite intangible. Apart from the architects themselves, no one really knows what is exactly going on in one of the world’s oldest professions. All the more reason to discuss this with Pascal Grosfeld, who holds his own architecture bureau Grosfeld van der Velde, together with his business partner Bart van der Velde.

When asked how that style can be recognised, Grosfeld answers: “Every building that we work on has its own character as we always try to look at its surroundings, so we are able to create something that looks timeless. Our job is about more than just sketching something beautiful – there is a social responsibility involved as well. You have to think about what the building does for its users and environment.”

“When I started as an architect, about 20 years ago, it was the beginning of the use of computers in our field of work. Drawing programmes started to come up and our business started moving from the drafting table to the computer.” As more and more people got access to computers or, to be more specific, the internet, the visual culture also began to change, according to Grosfeld. Obviously, this led to more inspiration for their clients, but it led to more copycat behaviour as well.

That is also one of the reasons the bureau is great at what they do, because they take a great deal of time to get to know their clients and to interpret their wishes from beginning to end. Grosfeld: “I am not able to just make some drafts after a client has requested us to start on a project; I really have to know how the client is made, to learn about the ‘why’ behind her or his request.” He believes that this personal approach and attention is something that makes the bureau able to distinguish itself from their competition.

Thanks to its exclusive and firm style, Grosfeld van der Velde is among the top architect bureaus in the Netherlands. 26  |  Issue 42  |  June 2017

Apart from the way they deal with their clients, Grosfeld van der Velde is also a

bureau that operates in the entire width of their working field, with, of course, some specialties: “For example, the private sector, where our style is considered quite exclusive. But we are also very experienced when it comes to renovating monumental buildings. To be fair, we have the knowledge to take on almost every project.” www.grosfeldvandervelde.nl