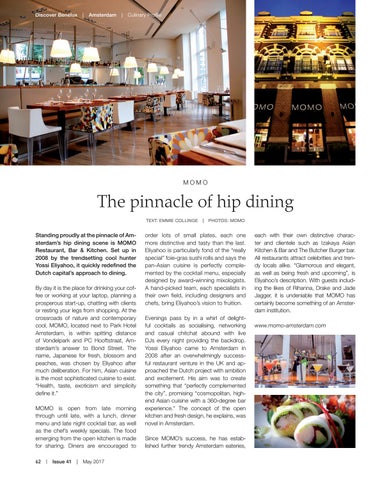 Standing proudly at the pinnacle of Amsterdam’s hip dining scene is MOMO Restaurant, Bar & Kitchen. Set up in 2008 by the trendsetting cool hunter Yossi Eliyahoo, it quickly redefined the Dutch capital’s approach to dining. By day it is the place for drinking your coffee or working at your laptop, planning a prosperous start-up, chatting with clients or resting your legs from shopping. At the crossroads of nature and contemporary cool, MOMO, located next to Park Hotel Amsterdam, is within spitting distance of Vondelpark and PC Hooftstraat, Amsterdam’s answer to Bond Street. The name, Japanese for fresh, blossom and peaches, was chosen by Eliyahoo after much deliberation. For him, Asian cuisine is the most sophisticated cuisine to exist. “Health, taste, exoticism and simplicity define it.” MOMO is open from late morning through until late, with a lunch, dinner menu and late night cocktail bar, as well as the chef’s weekly specials. The food emerging from the open kitchen is made for sharing. Diners are encouraged to 62  |  Issue 41  |  May 2017

order lots of small plates, each one more distinctive and tasty than the last. Eliyahoo is particularly fond of the “really special” foie-gras sushi rolls and says the pan-Asian cuisine is perfectly complemented by the cocktail menu, especially designed by award-winning mixologists. A hand-picked team, each specialists in their own field, including designers and chefs, bring Eliyahoo’s vision to fruition. Evenings pass by in a whirl of delightful cocktails as socialising, networking and casual chitchat abound with live DJs every night providing the backdrop. Yossi Eliyahoo came to Amsterdam in 2008 after an overwhelmingly successful restaurant venture in the UK and approached the Dutch project with ambition and excitement. His aim was to create something that “perfectly complemented the city”, promising “cosmopolitan, highend Asian cuisine with a 360-degree bar experience.” The concept of the open kitchen and fresh design, he explains, was novel in Amsterdam. Since MOMO’s success, he has established further trendy Amsterdam eateries,

each with their own distinctive character and clientele such as Izakaya Asian Kitchen & Bar and The Butcher Burger bar. All restaurants attract celebrities and trendy locals alike. “Glamorous and elegant, as well as being fresh and upcoming”, is Eliyahoo’s description. With guests including the likes of Rihanna, Drake and Jade Jagger, it is undeniable that MOMO has certainly become something of an Amsterdam institution. www.momo-amsterdam.com