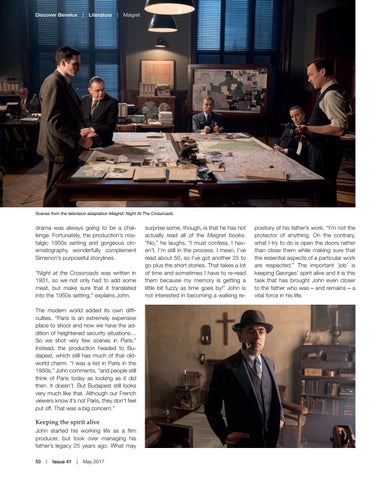 Scenes from the television adaptation Maigret: Night At The Crossroads.

drama was always going to be a challenge. Fortunately, the production’s nostalgic 1950s setting and gorgeous cinematography wonderfully complement Simenon’s purposeful storylines. “Night at the Crossroads was written in 1931, so we not only had to add some meat, but make sure that it translated into the 1950s setting,” explains John. The modern world added its own difficulties. “Paris is an extremely expensive place to shoot and now we have the addition of heightened security situations… So we shot very few scenes in Paris.” Instead, the production headed to Budapest, which still has much of that oldworld charm. “I was a kid in Paris in the 1950s,” John comments, “and people still think of Paris today as looking as it did then. It doesn’t. But Budapest still looks very much like that. Although our French viewers know it’s not Paris, they don’t feel put off. That was a big concern.”

Keeping the spirit alive John started his working life as a film producer, but took over managing his father’s legacy 25 years ago. What may 50  |  Issue 41  |  May 2017

surprise some, though, is that he has not actually read all of the Maigret books. “No,” he laughs, “I must confess, I haven’t. I’m still in the process. I mean, I’ve read about 50, so I’ve got another 25 to go plus the short stories. That takes a lot of time and sometimes I have to re-read them because my memory is getting a little bit fuzzy as time goes by!” John is not interested in becoming a walking re-

pository of his father’s work. “I’m not the protector of anything. On the contrary, what I try to do is open the doors rather than close them while making sure that the essential aspects of a particular work are respected.” The important ‘job’ is keeping Georges’ spirit alive and it is this task that has brought John even closer to the father who was – and remains – a vital force in his life.