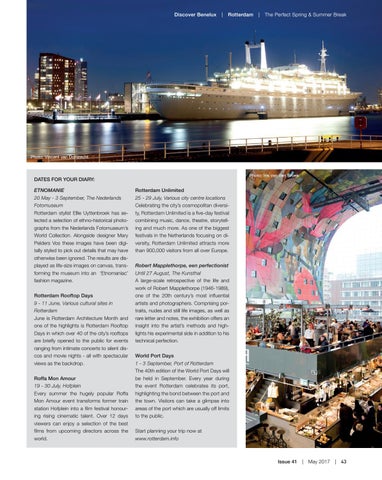 DATES FOR YOUR DIARY: ETNOMANIE 20 May - 3 September, The Nederlands Fotomuseum Rotterdam stylist Ellie Uyttenbroek has selected a selection of ethno-historical photographs from the Nederlands Fotomuseum’s World Collection. Alongside designer Mary Pelders Vos these images have been digitally styled to pick out details that may have otherwise been ignored. The results are displayed as life-size images on canvas, transforming the museum into an ‘Etnomaniac’ fashion magazine. Rotterdam Rooftop Days 9 - 11 June, Various cultural sites in Rotterdam June is Rotterdam Architecture Month and one of the highlights is Rotterdam Rooftop Days in which over 40 of the city’s rooftops are briefly opened to the public for events ranging from intimate concerts to silent discos and movie nights - all with spectacular views as the backdrop. Roffa Mon Amour 19 - 30 July, Hofplein Every summer the hugely popular Roffa Mon Amour event transforms former train station Hofplein into a film festival honouring rising cinematic talent. Over 12 days viewers can enjoy a selection of the best films from upcoming directors across the world.

Robert Mapplethorpe, een perfectionist Until 27 August, The Kunsthal A large-scale retrospective of the life and work of Robert Mapplethorpe (1946-1989), one of the 20th century’s most influential artists and photographers. Comprising portraits, nudes and still life images, as well as rare letter and notes, the exhibition offers an insight into the artist’s methods and highlights his experimental side in addition to his technical perfection. World Port Days 1 - 3 September, Port of Rotterdam The 40th edition of the World Port Days will be held in September. Every year during the event Rotterdam celebrates its port, highlighting the bond between the port and the town. Visitors can take a glimpse into areas of the port which are usually off limits to the public. Start planning your trip now at www.rotterdam.info