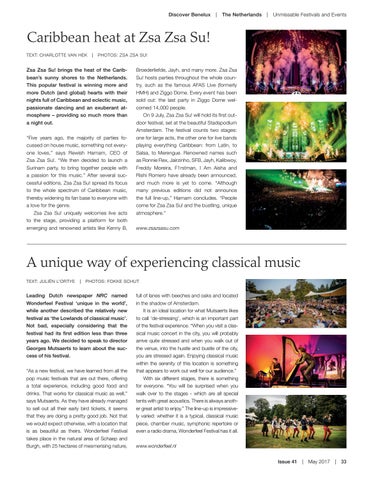 Zsa Zsa Su! brings the heat of the Caribbean’s sunny shores to the Netherlands. This popular festival is winning more and more Dutch (and global) hearts with their nights full of Caribbean and eclectic music, passionate dancing and an exuberant atmosphere – providing so much more than a night out. “Five years ago, the majority of parties focussed on house music, something not everyone loves,” says Rewish Harnam, CEO of Zsa Zsa Su!. “We then decided to launch a Surinam party, to bring together people with a passion for this music.” After several successful editions, Zsa Zsa Su! spread its focus to the whole spectrum of Caribbean music, thereby widening its fan base to everyone with a love for the genre. Zsa Zsa Su! uniquely welcomes live acts to the stage, providing a platform for both emerging and renowned artists like Kenny B,

Broederliefde, Jayh, and many more. Zsa Zsa Su! hosts parties throughout the whole country, such as the famous AFAS Live (formerly HMH) and Ziggo Dome. Every event has been sold out: the last party in Ziggo Dome welcomed 14,000 people. On 9 July, Zsa Zsa Su! will hold its first outdoor festival, set at the beautiful Stadspodium Amsterdam. The festival counts two stages: one for large acts, the other one for live bands playing everything Caribbean: from Latin, to Salsa, to Merengue. Renowned names such as Ronnie Flex, Jairzinho, SFB, Jayh, Kalibwoy, Freddy Moreira, F1rstman, I Am Aisha and Rishi Romero have already been announced, and much more is yet to come. “Although many previous editions did not announce the full line-up,” Harnam concludes. “People come for Zsa Zsa Su! and the bustling, unique atmosphere.” www.zsazsasu.com

Leading Dutch newspaper NRC named Wonderfeel Festival ‘unique in the world’, while another described the relatively new festival as ‘the Lowlands of classical music’. Not bad, especially considering that the festival had its first edition less than three years ago. We decided to speak to director Georges Mutsaerts to learn about the success of his festival. “As a new festival, we have learned from all the pop music festivals that are out there, offering a total experience, including good food and drinks. That works for classical music as well,” says Mutsaerts. As they have already managed to sell out all their early bird tickets, it seems that they are doing a pretty good job. Not that we would expect otherwise, with a location that is as beautiful as theirs. Wonderfeel Festival takes place in the natural area of Schaep and Burgh, with 25 hectares of mesmerising nature,

full of lanes with beeches and oaks and located in the shadow of Amsterdam. It is an ideal location for what Mutsaerts likes to call ‘de-stressing’, which is an important part of the festival experience. “When you visit a classical music concert in the city, you will probably arrive quite stressed and when you walk out of the venue, into the hustle and bustle of the city, you are stressed again. Enjoying classical music within the serenity of this location is something that appears to work out well for our audience.” With six different stages, there is something for everyone. “You will be surprised when you walk over to the stages - which are all special tents with great acoustics. There is always another great artist to enjoy.” The line-up is impressively varied: whether it is a typical, classical music piece, chamber music, symphonic repertoire or even a radio drama, Wonderfeel Festival has it all. www.wonderfeel.nl Issue 41  |  May 2017  |  33