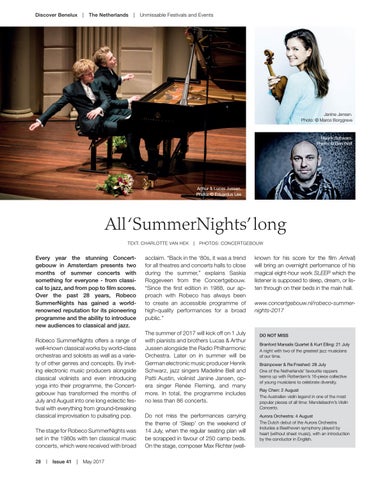 Every year the stunning Concertgebouw in Amsterdam presents two months of summer concerts with something for everyone - from classical to jazz, and from pop to film scores. Over the past 28 years, Robeco SummerNights has gained a worldrenowned reputation for its pioneering programme and the ability to introduce new audiences to classical and jazz. Robeco SummerNights offers a range of well-known classical works by world-class orchestras and soloists as well as a variety of other genres and concepts. By inviting electronic music producers alongside classical violinists and even introducing yoga into their programme, the Concertgebouw has transformed the months of July and August into one long eclectic festival with everything from ground-breaking classical improvisation to pulsating pop. The stage for Robeco SummerNights was set in the 1980s with ten classical music concerts, which were received with broad 28  |  Issue 41  |  May 2017

acclaim. “Back in the ‘80s, it was a trend for all theatres and concerts halls to close during the summer,” explains Saskia Roggeveen from the Concertgebouw. “Since the first edition in 1988, our approach with Robeco has always been to create an accessible programme of high-quality performances for a broad public.” The summer of 2017 will kick off on 1 July with pianists and brothers Lucas &amp; Arthur Jussen alongside the Radio Philharmonic Orchestra. Later on in summer will be German electronic music producer Henrik Schwarz, jazz singers Madeline Bell and Patti Austin, violinist Janine Jansen, opera singer Renée Fleming, and many more. In total, the programme includes no less than 86 concerts. Do not miss the performances carrying the theme of ‘Sleep’ on the weekend of 14 July, when the regular seating plan will be scrapped in favour of 250 camp beds. On the stage, composer Max Richter (well-

known for his score for the film Arrival) will bring an overnight performance of his magical eight-hour work SLEEP which the listener is supposed to sleep, dream, or listen through on their beds in the main hall. www.concertgebouw.nl/robeco-summernights-2017

DO NOT MISS Branford Marsalis Quartet &amp; Kurt Elling: 21 July A night with two of the greatest jazz musicians of our time. Brainpower &amp; Re:Freshed: 28 July One of the Netherlands’ favourite rappers teams up with Rotterdam’s 16-piece collective of young musicians to celebrate diversity. Ray Chen: 2 August The Australian violin legend in one of the most popular pieces of all time: Mendelssohn’s Violin Concerto. Aurora Orchestra: 4 August The Dutch debut of the Aurora Orchestra includes a Beethoven symphony played by heart (without sheet music), with an introduction by the conductor in English.