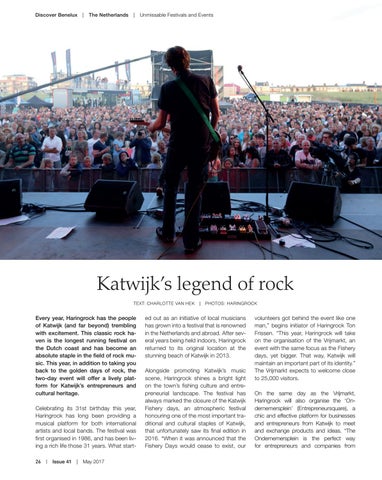 Every year, Haringrock has the people of Katwijk (and far beyond) trembling with excitement. This classic rock haven is the longest running festival on the Dutch coast and has become an absolute staple in the field of rock music. This year, in addition to taking you back to the golden days of rock, the two-day event will offer a lively platform for Katwijk’s entrepreneurs and cultural heritage. Celebrating its 31st birthday this year, Haringrock has long been providing a musical platform for both international artists and local bands. The festival was first organised in 1986, and has been living a rich life those 31 years. What start26  |  Issue 41  |  May 2017

ed out as an initiative of local musicians has grown into a festival that is renowned in the Netherlands and abroad. After several years being held indoors, Haringrock returned to its original location at the stunning beach of Katwijk in 2013. Alongside promoting Katwijk’s music scene, Haringrock shines a bright light on the town’s fishing culture and entrepreneurial landscape. The festival has always marked the closure of the Katwijk Fishery days, an atmospheric festival honouring one of the most important traditional and cultural staples of Katwijk, that unfortunately saw its final edition in 2016. “When it was announced that the Fishery Days would cease to exist, our

volunteers got behind the event like one man,” begins initiator of Haringrock Ton Frissen. “This year, Haringrock will take on the organisation of the Vrijmarkt, an event with the same focus as the Fishery days, yet bigger. That way, Katwijk will maintain an important part of its identity.” The Vrijmarkt expects to welcome close to 25,000 visitors. On the same day as the Vrijmarkt, Haringrock will also organise the ‘Ondernemersplein’ (Entrepreneursquare), a chic and effective platform for businesses and entrepreneurs from Katwijk to meet and exchange products and ideas. “The Ondernemersplein is the perfect way for entrepreneurs and companies from