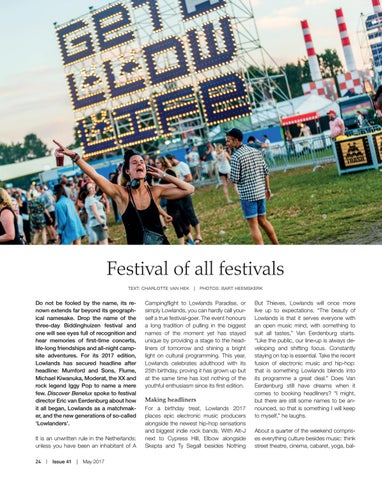 Do not be fooled by the name, its renown extends far beyond its geographical namesake. Drop the name of the three-day Biddinghuizen festival and one will see eyes full of recognition and hear memories of first-time concerts, life-long friendships and all-night campsite adventures. For its 2017 edition, Lowlands has secured headline after headline: Mumford and Sons, Flume, Michael Kiwanuka, Moderat, the XX and rock legend Iggy Pop to name a mere few. Discover Benelux spoke to festival director Eric van Eerdenburg about how it all began, Lowlands as a matchmaker, and the new generations of so-called ‘Lowlanders’. It is an unwritten rule in the Netherlands: unless you have been an inhabitant of A 24  |  Issue 41  |  May 2017

Campingflight to Lowlands Paradise, or simply Lowlands, you can hardly call yourself a true festival-goer. The event honours a long tradition of pulling in the biggest names of the moment yet has stayed unique by providing a stage to the headliners of tomorrow and shining a bright light on cultural programming. This year, Lowlands celebrates adulthood with its 25th birthday, proving it has grown up but at the same time has lost nothing of the youthful enthusiasm since its first edition.

Making headliners For a birthday treat, Lowlands 2017 places epic electronic music producers alongside the newest hip-hop sensations and biggest indie rock bands. With Alt-J next to Cypress Hill, Elbow alongside Skepta and Ty Segall besides Nothing

But Thieves, Lowlands will once more live up to expectations. “The beauty of Lowlands is that it serves everyone with an open music mind, with something to suit all tastes,” Van Eerdenburg starts. “Like the public, our line-up is always developing and shifting focus. Constantly staying on top is essential. Take the recent fusion of electronic music and hip-hop: that is something Lowlands blends into its programme a great deal.” Does Van Eerdenburg still have dreams when it comes to booking headliners? “I might, but there are still some names to be announced, so that is something I will keep to myself,” he laughs. About a quarter of the weekend comprises everything culture besides music: think street theatre, cinema, cabaret, yoga, bal-