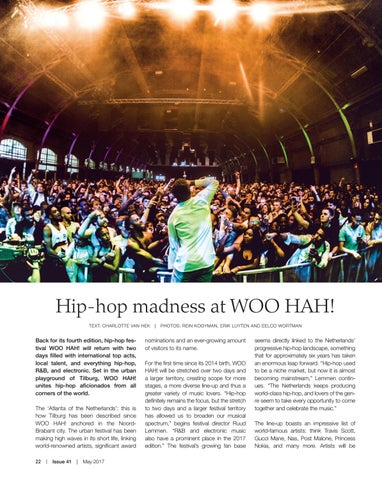 Back for its fourth edition, hip-hop festival WOO HAH! will return with two days filled with international top acts, local talent, and everything hip-hop, R&B, and electronic. Set in the urban playground of Tilburg, WOO HAH! unites hip-hop aficionados from all corners of the world. The ‘Atlanta of the Netherlands’: this is how Tilburg has been described since WOO HAH! anchored in the NoordBrabant city. The urban festival has been making high waves in its short life, linking world-renowned artists, significant award 22  |  Issue 41  |  May 2017

nominations and an ever-growing amount of visitors to its name. For the first time since its 2014 birth, WOO HAH! will be stretched over two days and a larger territory, creating scope for more stages, a more diverse line-up and thus a greater variety of music lovers. “Hip-hop definitely remains the focus, but the stretch to two days and a larger festival territory has allowed us to broaden our musical spectrum,” begins festival director Ruud Lemmen. “R&B and electronic music also have a prominent place in the 2017 edition.” The festival’s growing fan base

seems directly linked to the Netherlands’ progressive hip-hop landscape, something that for approximately six years has taken an enormous leap forward. “Hip-hop used to be a niche market, but now it is almost becoming mainstream,” Lemmen continues. “The Netherlands keeps producing world-class hip-hop, and lovers of the genre seem to take every opportunity to come together and celebrate the music.” The line-up boasts an impressive list of world-famous artists: think Travis Scott, Gucci Mane, Nas, Post Malone, Princess Nokia, and many more. Artists will be